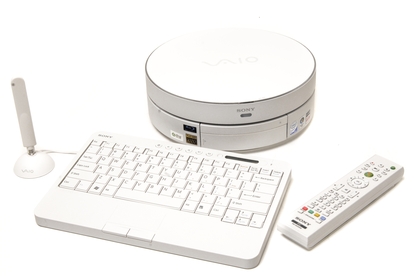 We like the new form factor, we like the Blu-ray player and we like the HDMI output, but the external USB TV-tuner should really be an internal device. That aside, the TP2G is a good performer and has a reasonable amount of space on board for media enthusiasts.

Sony has never been shy about introducing new form factors or designs to the market, which is why it's no surprise to see the VAIO TP2 G home entertainment PC roll off the Sony production line and into our living rooms. Shaped like an oversized biscuit tin, the VAIO TP2 G is not quite a notebook, not quite a desktop PC and, unfortunately, not quite a media centre. Between its design, the Blu-ray player and the HDMI output, this Sony VAIO TP2 G does a good job of filling its role as a living room PC, but it does have its flaws.

Unlike a notebook the TP2G doesn't include a battery, though most of the components are derived from notebook technology. First on the list is one of Intel's latest notebook 45nm (nanometre) CPUs, the 2.1GHz T8100. The T8100 offers an 800MHz front side bus with a 3MB L2 cache and theoretically runs cooler than the previous generation of Intel CPUs, thanks to its 45nm fabrication process. There is 2GB of DDR2 RAM installed, and a decent 500GB of hard drive space, providing plenty of storage for music, movies, applications and anything else you want to keep on there. The hard drive is a full 3.5in desktop style drive running at 7200rpm, rather than the notebook style 2.5in drives. An NVIDIA GeForce 8400M GT graphics card is on board to handle video decoding and any low level gaming you might want to squeeze out of this device.

There are no sharp edges on the whole machine, giving this PC a nice aesthetic. The all-white chassis may not suit everybody's living-room colour scheme, but it could be worse. Looks-wise we're quite impressed for something that's intended to be on display in the entertainment room of the house, rather than tucked away in a study. Our only gripe is with the placement of the product stickers, which glare out at you on the front of the unit and can't be easily removed.

The front of the machine has a nifty slide-away panel that reveals a pair of USB ports, a mini-FireWire port and a pair of media card slots, as well as a hard switch for the Wi-Fi 802.11a/b/g and draft-n adapter, which gets its signal via an attachable aerial. The system is DLNA certified, meaning it can be more easily connected to other DLNA devices, such as the PlayStation 3. On the back you'll notice the HDMI port for outputting to TVs and home theatre systems, as well as a D-Sub output for PC monitors. If your gear doesn't have an HDMI port, it's not quite as ready for this machine as those who do. An optical output is present for digital audio output, plus a set of headphone and microphone ports are present.

A separate Bluetooth keyboard with a built-in touchpad comprises the main controls, though the system does include a remote control. For general computer use the keyboard is the only option, except when using Sony's Living Browser, a Browser designed to work with the remote controls basic button configuration. We do appreciate the potential convenience of the Living Browser, but found it too clumsy for any serious use. However, for media controls the remote works well. The TP2G runs a copy of Windows Vista Home Premium, which includes Windows Media Center, an application that's perfectly suited to remotes.

The system is bundled with a USB digital TV tuner, which is one of the biggest flaws of this whole device. Not to say the tuner is that bad. We were able to pick up all channels available to our area. However, the USB device pokes out from the main unit and is both unsightly and cumbersome. The fact that it's bundled suggests a response to negative feedback about the lack of an internal tuner, a sentiment we have to agree with. Although your TV can handle the TV tuner work it may not have a digital tuner and, in most cases, can't record TV, which is half the purpose of this VAIO. Subsequently you're going to be forced into connecting the tuner and aerial cable once in a while, or suffer the ugly black USB stain on an otherwise stylish device.

One of the main functions of the TP2G is to act as a Blu-ray player, which it does well. The drive stays hidden until ejected. Playing a movie is as easy as playing a DVD. Sony's Blu-ray software detects the disc and off you go.

In our benchmarks the Sony VAIO TP2G scored very well, achieving an 88 in WorldBench 6. We also ran an MP3 encoding test to see how well it encoded music. Taking 53 minutes worth of WAV files and converting them to 192KBps MP3 files took 82sec, a good result on both accounts. We don't envisage anyone having any performance issues with this machine, especially in the role it's intended to fill.