Stacks of built-in features don't weigh down this stylish VAIO laptop, but it could use faster storage and a larger viewing area 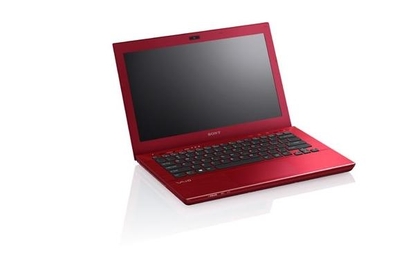 Sony's S Series VAIO is a 13.3in notebook that packs plenty of features. It's also attractive and comfortable to use. It's mainly let down by slow performance due to a 5400rpm hard drive. We also wish it had a higher resolution screen and a better ambient light sensor controller. Apart from those issues though, we think it's a great unit to consider if you're looking to buy a stylish, highly mobile, yet fully-featured laptop before the end of the financial year.

Sony's 13.3in VAIO S Series laptop is a very good work computer. It has integrated features that won't leave you wanting while you're on the road, and its keyboard and touchpad are comfortable to use for typing and navigating around the screen. We do wish the screen was better though; it has a relatively low resolution and slightly narrow vertical viewing angles. There are also some other issues with this laptop that make it just good rather than great.

The VAIO S Series SVS13126PG is a mature model that uses a third-generation Intel Core i5-3210M CPU, which gives the S Series a little more oomph than Ultrabooks that use ultra-low voltage CPUs (U models). It also comes with 4GB of RAM, a 5400rpm, 750GB hard drive and an NVIDIA GeForce GT 640M LE graphics adapter. In our Blender 3D rendering test, the VAIO got 40sec, while in our iTunes MP3 encoding test it got 53sec. Both are times we expected from a laptop with this CPU.

The hard drive in this notebook provides plenty of space for storing large files (and lots of them), but it's slow. This was confirmed in the CrystalDiskMark test, in which the drive recorded a sequential read rate of 90 megabytes per second (MBps) and a write rate of 91MBps. Usually we expect rates closer to 110MBps for a laptop with a hard drive in this price range.

Because it uses a regular-voltage CPU, the chassis needs to have adequate space for cooling. As such, the S Series has a base that's around 24mm thick. This makes it 6mm thicker than a 13.3in Ultrabook, but it's still quite a mobile unit that's easy to handle and not a chore to transport over long distances.

It's a great model to take on the road because at just over 1.7kg, it doesn't feel too heavy; this is despite having such a rich set of built-in features. You get a discrete graphics adapter, dual-band Wi-Fi, Gigabit Ethernet, VGA and full-sized HDMI ports, full-sized SD and HG Duo card slots, and it even comes with a DVD burner in case you ever need to load info from an optical disc.

Almost all of the ports and slots are on the right side of the laptop's chassis. We often wanted to plug USB drives into the left side in order to manage cables better, but always had to settle for relocating them to the right side. Two of the USB ports are of the 3.0 variety. Another issue is that they are all next to each other, which means if you ever need to plug in an oversized USB key (we have a thick one in the shape of a V8 Supercar that holds our benchmark files, for example), and still need to use the other ports at the same time, you might be hindered.

The build quality is solid overall, but we did notice some squeaking from the hinges and also from some of the keyboard's keys in our test model. Our test model came in red, which we think looks fantastic, but we did manage to scratch some of the paint off while just chucking the unit into a backpack rather than a protective case.

We didn't end up using the optical drive, but it's great as a 'just in case I ever need it' feature, and it doesn't make the laptop too much heavier, nor does it make it feel bulky or flimsy. It's a slot-loading drive that takes up minimal space and it looks great. There is a separate eject button for it just above the ESC key, which is a convenient place, and it sits just to the left of a switch that can determine which graphics adapter the laptop uses: the integrated Intel HD 4000 graphics, or the discrete NVIDIA GeForce GT 640M graphics.

In our performance tests, the Intel HD 4000 graphics performed a little slower than we're used to seeing in 3Dmark06, getting 2816, while the NVIDIA 640M LE adapter (which is slower than a regular 640M adapter) got 4964. In the latest 3DMark tests, the Intel graphics recorded 13963 for the basic Ice Storm test, 1720 for the mid-range Cloud Gate test and 303 for high-end Fire Strike test. The NVIDIA graphics boosted all of these marks: 24120 for Ice Storm, 2339 for Cloud Gate and 309 for Fire Strike. From these results we can see that the VAIO still isn't great for processing complex 3D graphics in games.

The chassis doesn't get overly warm when you use the notebook for basic office and Web tasks, but it can get quite hot if you use it to process 3D graphics for a prolonged period of time. If you only use it on your lap for basic tasks, you won't get uncomfortable, but if you decide to somehow play some games on your lap, you'll definitely feel the heat.

Battery life was good in our tests, and unlike many dual-graphics laptops that switch between discrete and integrated graphics on their own, the S Series will use the graphics adapter that has been physically set by the mode switch: Stamina uses the internal graphics and speed uses the NVIDIA graphics. Basically, the switch changes the power profile from High performance (Speed) to Balanced (Stamina). In our rundown tests, in which we disable power management, enable Wi-Fi, maximise screen brightness and loop an Xvid-encoded video, the Stamina mode lasted an excellent 5hr 10min.

When we used Speed mode, it lasted an equally impressive 4hr 49min. In the overall scheme of things, you can keep the Stamina mode on for all tasks unless you want to run some games or are performing tasks where graphics acceleration can be beneficial, such as image and video editing.

The screen, keyboard and touchpad

The screen is decent for editing images and viewing videos. It has rich colours and brightness and it's easy on the eyes, but its viewing angles are not great. We often found ourselves having to adjust the tilt angle in order to see details in darker areas of the screen. Furthermore, the resolution is relatively low at 1366x768 and we were often frustrated by this when we lined up two windows side by side for multitasking. A better screen in this laptop would make it a killer.

We also think ambient light sensor in this laptop needs some refining so that it integrates with Windows 8 better. In order to enable or disable it, you have to use Sony's preloaded software; the same goes for the keyboard's backlight — there is no F-key combination to enable or disable the backlight. Luckily, though, the ambient sensor can control the keyboard's light, which means you can set it to come on when it detects dull lighting conditions.

The sensor worked very well for the keyboard, but a lot of the time it didn't work properly for the screen brightness. It also overrode our own settings; if we adjusted the screen brightness in Windows 8 manually, then restarted the computer, the brightness would revert to maximum when the ambient light sensor was enabled, and not to the predefined level we had set. And it definitely didn't set it to the level it should have auto-detected according to our environment. We ended up disabling it and changing brightness manually.

The touchpad is a large one at 119x62mm and it supports multi-finger gestures as well as Windows 8 swipe-in gestures. It was responsive and accurate in our tests, but the location of the large pad, which is centred according to the chassis and not the space bar, meant that it sometimes got in the way while typing. We sometimes moved the cursor inadvertently and overwrote text further up the page. Sony has installed a utility that sits in the System Tray that allows you to disable the pad quickly, perhaps in anticipation that many people might want to disable it while typing.

The touchpad comes with two-finger scrolling and three-finger flicking functions reversed, but this can be changed in the driver.

The VAIO S Series isn't perfect, but it's a great proposition for anyone who wants something stylish and easily mobile, yet packed with features, too. It could use a solid state drive to boost the overall performance, but there is a model available (the SVS13A35PGB) that has a hybrid drive and a higher price. Go for that instead if you want quicker loading times for frequently-used applications. We also wish the screen was better and that the ambient light sensor wasn't so hit and miss.