Sony's VAIO E Series 14P has a good CPU and discrete graphics, making it a worthwhile laptop to consider if you want to do serious work, but it does have a very glossy screen, which could get irritating. Its design is interesting, but a little bulky, and Sony is the only vendor we've seen to ship keyboard overlays with some of its laptops, so this model will defintiely stand out with its purple keyboard.

The Sony VAIO E Series 14P (SVE14A16FG) is a 14in laptop with a quad-core, third generation Intel Core i7 CPU, discrete graphics and plenty of storage. It's a relatively mobile machine that packs lots of power and features into its base, but it's a laptop that also feels a little bulky. It weighs 2.2kg and is 340mm wide and 33mm thick, so it's not exactly as desirable as a svelte Ultrabook, for example.

Sony has always created relatively interesting laptops to look at, and with the E Series 14P, there is plenty to draw your attention. There are the purple-shaded keys and touchpad perimeter, the rubber keyboard overlay, the very glossy screen and bezel, and a base that's a little longer than the lid when the notebook is closed. Whether you think it's ugly or not is up to you, but we think it's a little too glossy.

The base houses a DVD burner, as SD card slot, separate keyboard and microphone ports, four USB ports (two of which are USB 3.0), HDMI, VGA and Gigabit Ethernet. As far as laptop features go, this is a good set, and we like that there are two USB ports on each side for convenience. You also get a webcam, Bluetooth and 802.11n Wi-Fi. Unfortunately, the Wi-Fi adapter is an Intel Wireless-N 2230, which only performs in the 2.4GHz frequency band; it does support Intel Wireless Display (WiDi) though.

There is a powerful configuration inside the laptop. The Ivy Bridge-based Intel Core i7-3612QM CPU runs at 2.1GHz and has four cores as well as Hyper-Threading, which allows the CPU to work on eight software threads simultaneously, making it perfect for multi-threaded applications and extreme multitasking. It's joined by 4GB of DDR3 SDRAM (1600MHz) and an AMD Radeon HD 7670M graphics adapter with switching technology. Our test laptop came with a 320GB, 5400rpm Hitachi hard drive, but retail versions of the same laptop ship with a much larger 750GB, 5400rpm model.

The configuration in our model performed well in some tests, but not all. It recorded a time of 22sec in the Blender 3D rendering test, 50sec in our iTunes MP3 encoding test, and 47min in our AutoGordianKnot DVD-to-Xvid transcoding test. Compared to the other Core i7-3612QM laptop we've seen, Lenovo's ThinkPad Edge E530, the Blender time is spot on, but the iTunes and AutoGordianKnot times are on the slow side. The Lenovo has 8GB of RAM and a hard drive with a higher density though. In CrystalDiskMark, the hard drive put up a read rate of 72 megabytes per second (MBps) and a write rate of 70MBps, which is also sluggish for a notebook of this calibre.

There are USB ports on either side, which is convenient, although only the left side has USB 3.0.

Graphics performance was solid in 3DMark06, recording 9014, and this shows that it's capable of being used to run the latest games, albeit not with the highest detail and resolution settings. To save battery life, the laptop automatically switches to the integrated Intel HD 4000 graphics. In 3DMark, the integrated graphics recorded 4910, which is also a fine result.

In our battery rundown test, in which we disable power management, enable Wi-Fi, maximise brightness and loop an Xvid-encoded video, the VAIO recorded a time of 3hr 19min, which is at least 10min less than we were expecting. When using the laptop for basic Web browsing, word processing, photo viewing, occasional video watching and music listening, it lasted around four hours. That was with the screen at medium brightness.

We like the fact that the screen has a native resolution of 1600x900, which is better than the 1366x768 we're used to seeing on mid-sized laptops, and it's a bright screen with acceptable viewing angles. However, it is very glossy and reflections from light sources can make for an annoying viewing experience. There is an ambient light sensor installed the base just above the keyboard, but it didn't control the screen brightness, only the keyboard's backlight. 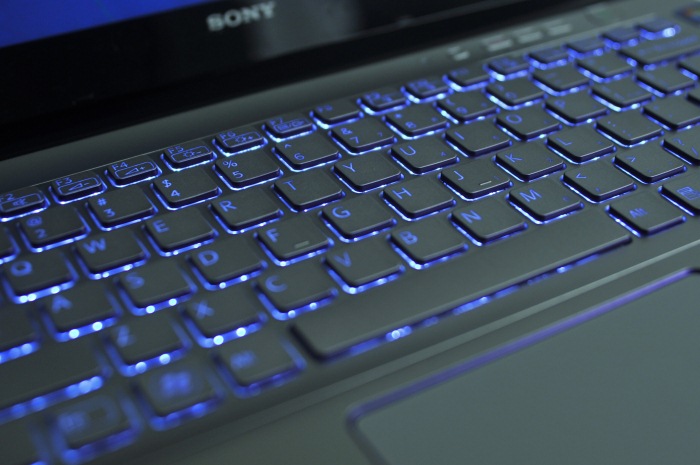 The keyboard itself has a chiclet style with full-sized keys and a standard layout. The arrow keys are half-sized, but are easy to feel for and they have secondary functions as page, home and end keys. We didn't have too much trouble typing on this keyboard and found it to be comfortable for the most part, although we noticed that the keys are a little too resistive and the keyboard is a little bouncy in the middle.

We like the backlight, but there is no toggle for it. It's controlled by the ambient light sensor and comes on automatically in dimly-lit environments. There is a timer that switches the backlight off in periods of inactivity. A rubber keyboard overlay ships with the notebook, and can be used to give the keys more visual definition when typing during the day — by default, the silver keys have see-through letters that don't stand out, whereas the overlay has purple keys with sharp, white lettering. Typing with the overlay isn't what we would call comfortable though, and at the very least requires a bit of practice. The first Sony laptop we saw with a keyboard overlay was the VAIO CB Series. 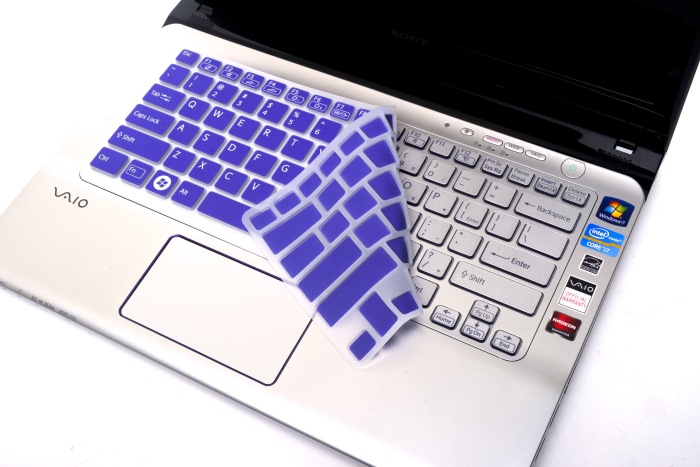 The touchpad is 98x57mm and has its left- and right-click buttons located underneath the pad itself. It's a Synaptics pad that supports two- and three-finger gestures, and it was responsive and accurate during our tests. However, the same can't be said for the buttons. Right-click operations, including right-clicking-and-dragging, were very rarely executed without any problems.

As for the overall feel of the laptop, it's a little on the 'plastic' side except for the screen, which has an aluminium lid. The base has a regular, mainstream design, with access panels for the RAM and hard drive components (there is an empty memory slot) and it didn't get overly warm. There are air inlets on the bottom and an exhaust vent on the side, and it can be easy to block the inlets, but we don't think it's the type of notebook that will be used for prolonged periods of time on a lap. Noise wasn't much of an issue, but the fan was noticeable when the notebook was processing heavy workloads.

Two speakers are located above the speakers, but they aren't anything special. They are okay for casual YouTube viewing, but headphones or speakers should be used if you want to enjoy music and movies. A couple of programmable application shortcut buttons are located above the keyboard, and that is also the location of the eject button for the optical drive.

It's worth noting that Sony has set up this laptop to perform Windows updates at 3am every day, and this means the notebook will wake up if it's on the network to perform these updates, which means two things: it can wake you up if the sound is not muted and the laptop is in the same room you sleep in, and the battery will be run down if the notebook is not plugged in to an outlet. We'd change the update procedure so that it checks and asks you when you want to download and install any updates. It's also worth noting that there is no physical Wi-Fi toggle and that an annoying software dock (VAIO Gate) sits at the top of the screen; it can get in the way when trying to switch browser tabs, for example.

All up, the Sony VAIO E Series 14P (SVE14A16FG) is a notebook that can be used efficiently for office and multimedia tasks. It offers decent overall user comfort, but it's nothing special. We'd do something about the touchpad's buttons and also make the keyboard a little less resistive.