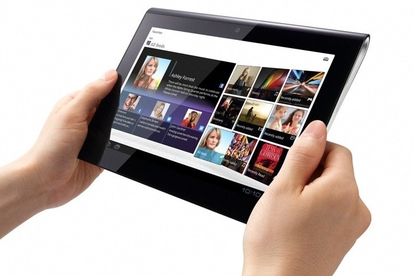 Sony has put a lot of work into the Tablet S and it definitely shows: its the most comfortable Android tablet to hold and use. It also bundles some exclusive, nifty apps that you won't find on any other tablet. We wish the screen was brighter, build quality better and software slicker, but the Tablet S remains a pretty good device on the whole.

We've long berated Android tablets for being "me too" devices, so when a tablet like Sony's Tablet S lands on our desk we can't help but get excited. Featuring a curved design that Sony says attempts to resemble a folded magazine, the Tablet S is one of the more distinctive devices we've seen this year. It's far from perfect: the 9.4in screen could be brighter, build quality could be better and its software isn't always slick. However, the Tablet S remains one of the better Android devices on the market and is a solid alternative to the iPad 2.

Unlike most other Android tablet manufacturers, Sony clearly spent plenty of time designing and engineering the Tablet S. The company says the physical attributes of the device shifts the weight to one side, making it feel lighter and therefore easy to hold. The wedge-like form factor of Tablet S is certainly distinctive: it looks like a book or magazine when the page is folded over behind it. This shape means the Tablet S sits upright when its placed on a desk or table, making it comfortable to type on and easier to see the screen at an appropriate angle. It also weighs just 598g so its not too heavy. 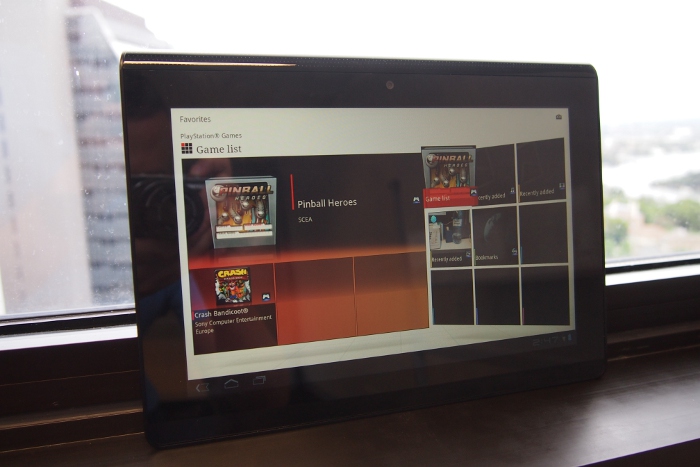 The wedge-style design of the Tablet S means its much thicker than most Android tablets on the market at 20.6mm but this doesn't make it too bulky or heavy in our opinion. There are plenty of design features we really like — two small rubber feet on the back of the Tablet S prevent it from slipping when laid flat on a desk or table, and the back is covered in an etched plastic that makes it very easy to grip, though its very glossy. The power and volume buttons are also perfectly positioned on the left side. They are easy to press without having to move your hand from its natural position when holding the device. These are only small touches but they make the Tablet S pleasing to use on a daily basis.

We really like the design of the Tablet S, but its a shame it's build quality is less than stellar. The plastic build may keep the weight down, but the Tablet S doesn't feel very sturdy. It noticeably creaks when the rear casing is pressed and the glossy black plastic is also a huge fingerprint magnet. The screen also flexes a little if you apply some pressure. We wouldn't bet on the Tablet S coming up trumps if you happened to drop it.

Sony has opted for a smaller 9.4in touchscreen display on the Tablet S when most other Android manufacturers have used 10.1in screens. The difference is negligible though, and unless you pair a 10.1in tablet alongside the Tablet S, you'd be hard pressed to notice a difference. The screen is clear and ideal for video playback, but its not as bright as some of its competitors, even at the highest brightness setting available.

The Sony Tablet S runs the 3.2 "Honeycomb" version of Google's Android platform but Sony has made plenty of changes to the standard Android user interface. On the home screen you'll find a favourites button next to the apps menu, and there are four shortcuts placed next to the voice actions icon: the Browser, e-mail, Sony's remote control app, and a Twitter and Facebook aggregater can quickly be accessed from here. You can also long press on the home screen to bring up a selection of apps, widgets, wallpapers and shortcuts to customise your homescreens. The idea isn't a new feature but Sony's implementation makes it a little easier to access. You can also separate the app drawer into customisable groups. 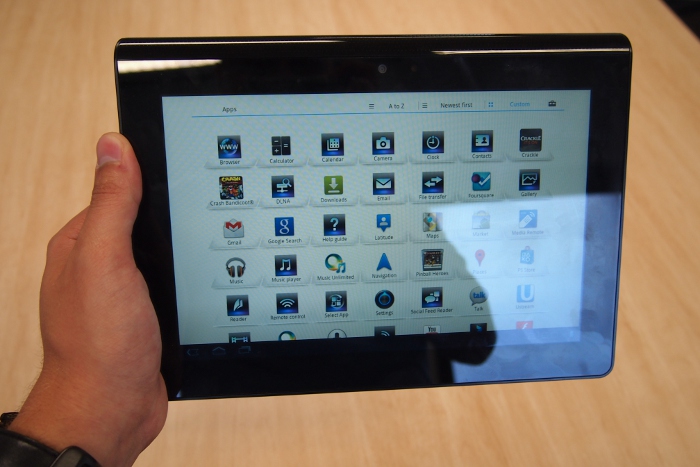 Sony includes a number of exclusive apps on the Tablet S that you won't find on any other Android tablet. There's a Media Remote app that can be used to control Sony televisions, a remote control app that turns the Tablet S into a universal remote to control devices that use infrared remote controls (like DVD players and stereo systems), and a DNLA app that enables easy connection to a TV or other DNLA-enabled device for multimedia streaming. We found the remote control app very handy: we successfully programmed it to replace the remote for a Panasonic television quite easily and it can be programmed to work with any infrared remote. It's simple, easy and a nice inclusion you won't find on any other tablet.