Sony’s battery-powered monolithic speaker is useful, unless you're on Android 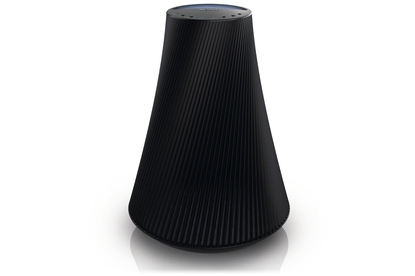 Sony’s SA-NS510 is a wireless network speaker that aims to make music listening a trouble-free and convenient experience. If you’ve got an iPhone and a strong Wi-Fi network, it works well, but the setup is otherwise seriously limited.

The Sonos PLAY:5 remains our favourite, and Sonos also our favourite vendor, although Pioneer’s new SMA speakers did wow us recently. Sony is stepping into the ring with three new network speakers — the $229 SA-NS310, the $299 SA-NS410, and $429 SA-NS510.

The Sony SA-NS510 has an interesting design. We’ve seen it likened to an upturned vase, a traffic cone, and a vertical wind tunnel. We happen to think it looks more like a futuristic trash can.

It’s not constructed in an especially ergonomic shape, but the SA-NS510 does look attractive. It’s got a twisting pattern running from the base to the top, with a grille around the lower quarter to dissipate sound from the speaker’s omnidirectional setup. There are some controls up top — power, input, voloume, and the enigmatic Party mode — and a carry handle with a soft glowing blue-or-white LED.

Down on the speaker’s base, facing outward, there’s a DC power jack, 3.5mm audio input, Ethernet wired network socket, and a couple of buttons for connecting the SA-NS510 to a Wi-Fi network. The speaker is 802.11b/g compliant — oddly, no 802.11n, so you’ll have to have your home network running in multi-standard mode.

On the SA-NS510’s actual base, hidden until you pick the speaker up and turn it over, are two switches. One is a physical hard-on/hard-off power switch, and the other alters the standby mode from a low-power sleep to a high-power one, where the SA-NS510 can be roused over Wi-Fi.

The SA-NS510 has a lithium-ion battery hidden inside its shell, good for up to 5 hours of playback time according to Sony.

You can use the Sony SA-NS510 with iOS and Android mobile devices using Sony’s Network Audio Remote app, via AirPlay on iOS, or via a network-connected PC or Mac. Here’s the rub — buying a Sony network speaker only really makes sense if you’ve got an iPhone, if you’ve got lots of music already stored on your phone, or if you’ve got free access to Sony’s Music Unlimited service. Android streaming music users are left somewhat in the lurch.

Sony’s Network Audio Remote app lets you play music that’s stored in your phone or tablet’s library, through any AirPlay-enabled app on iOS or Mac, or through DLNA off a PC. AirPlay works just as you’d expect, and Apple’s implementation means you can stream any audio through an app that has AirPlay support included.

On an Android smartphone, there’s no option to play music except through Sony’s app, and the problem is that beyond already-saved music, you’re only able to stream Sony’s Music Unlimited service, or vTuner internet radio. You can’t access Spotify, Rdio, Pandora, or any other music-streaming service. If you’ve got any music streaming subscription other than one to Music Unlimited, you’re out of luck.

There’s no Wi-Fi Direct option with the SA-NS510, either. Being battery powered is great — you can move it around your house as you like — but you’ll have to stay within range of your Wi-Fi router to be able to use it properly. Beyond that point, it’s just a big, battery-powered speaker you’ll have to connect to your phone or tablet with an audio cable.

When it actually gets down to listening to music, the Sony SA-NS510 does a perfectly acceptable job. It’s got reasonably strong mid-bass for a speaker of its size and weight, although treble is quite restrained. It can sound a little muddy and indistinct in the mid-range with some streaming tracks, though.

A very high maximum volume with little noticeable distortion, as well as reasonable-sounding audio from any angle — courtesy of the omnidirectional speaker design — means it’s probably best put to use in the middle of an outdoor party or spread-out picnic.

We tried out Party Streaming with a SA-NS510 and a SA-NS410, and found that it was more complicated to setup than an equivalent multi-channel speaker system from Libratone, Sonos or Pioneer. Once it’s all set up, music played out of both speakers with no lag — although there’s no option to set speakers up as individual stereo channels in the way that Sonos allows. It’s certainly possible, just not particularly easy.

Sony’s top wireless network speaker is an interesting concept. A battery-powered, Wi-Fi-enabled speaker that can stream music from all your devices sounds great, and in the Libratone Live and Pioneer XW-SMA3 it really works well.

Sony’s implementation in this network speaker is not so refined, though, and while the SA-NS510 does a reasonable job of being a speaker, the network part of the equation still needs some work.