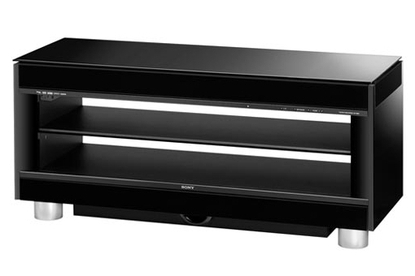 This is a great product in itself, however its price may make it unsuitable for those who don't need everything it delivers. Nevertheless, it's an incredibly attractive alternative to a standard 5.1 system for those looking to save space.

Sony's RHTG800 is quite an interesting product, essentially comprising a TV stand with shelves for DVD players, consoles, etc, and a built-in speaker and receiver. Using proprietary Sony S-Force technology to simulate a 5.1 sound from a single central speaker, the unit is an attractive option for those with limited space. With respectable sound quality and an attractive design, along with a wide range of inputs, this unit is one of the better 5.1 simulators we've seen.

The audio quality, whilst not fantastic, is nevertheless more than sufficient for most music and movie use. A relatively balanced range means that both bass and treble are clear and audible, without one being prioritised over the other. Although the lack of a separate subwoofer means that bass lacks a lot of power compared to other systems, it's nevertheless quite punchy, without too much loss of definition at all. Likewise, treble is clear and sharp, and maintains a good presence even when accompanied by high volume bass. The only significant complaint we could muster was the loss of definition at higher volumes, at which point the audio becomes slightly less clear. Nevertheless, at a respectable listening volume it isn't a problem.

The unit does quite an impressive job of simulating 5.1, and although it lacks the power of a full system, and the presence that one generates, it manages to simulate rear channels quite respectably, especially in a small room. Users living in small apartments or terrace houses, or adverse to dragging cables across their living room floors, could find an attractive solution in the RHTG800.

In terms of audio support, the system will handle most major surround sound formats, up to linear PCM 7.1 at 48k (although not 96k). Unfortunately, despite the presence of HDMI and an input specifically labelled for a Blu-ray disc player, no support for DTS-HD or Dolby TrueHD (the new high-definition surround sound formats included on most high-definition discs) is included.

The stand itself is quite elegant, with a glass top panel that, although susceptible to smudging, gives the entire unit a pleasant look to it. The stand is designed to support a maximum of 60kg on top, as well as 14kg on its upper shelf, and 25kg on its lower shelf. The shelves comprise an area approximately 1000mm wide and 400mm deep, with height adjustable to three presets, giving more than enough room for up to four DVD form factor products. Cable holders are present at the rear, as well as the inputs, which include three optical audio inputs, two analogue audio inputs, coaxial audio input, two HDMI inputs, and HDMI out.

Best suited to those with limited space, the RHTG800 is nevertheless a great product in itself. Really, its biggest problem is its niche nature - users who already have a TV stand or cabinet for their DVD players won't be getting the best value for money with this product, but for those outfitting a brand new home entertainment setup, this unit is well worth considering.