Sony's PlayStation Portable receives an Apple-esque makeover - for a price 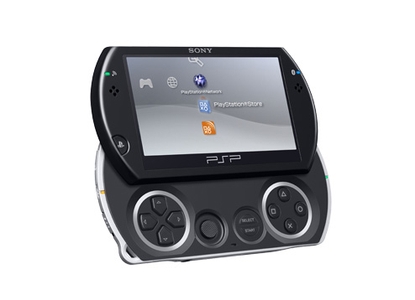 The PSPgo is a significant evolution of the Sony PlayStation Portable that impresses on almost every level. Unfortunately, its prohibitive price tag is difficult to overlook -- particularly when compared to the PSP 3000, which will be sold alongside it. Until Sony rethinks its pricing strategy, we fear the PSPgo will remain a trendy oddity.

The PSPgo is the latest iteration of Sony’s premier handheld games console, the PlayStation Portable. It follows hot on the heels of Nintendo’s camera-equipped DSi and marks Sony's fourth revision of the hardware. (Check out our reviews of the previous models here, here and here).

Unlike previous ‘re-imaginings’, the PSPgo offers a lot more than the requisite size reduction (though it is less than half the size of the original PSP). With its disc-free interface, redesigned slide-screen and 16 GB of inbuilt memory, it’s almost like a completely different console — albeit one with identical internal components and firmware. It can be viewed as Sony’s answer to the increasingly game-centric iPod Touch. Both devices require you to download games and media over the Internet. (Unfortunately, the lack of a UMD drive means old PSP games are incompatible, though you’ll still be able to purchase popular titles from the PlayStation Store.)

The most enticing aspect of the PSPgo is probably the new slide-screen and gamepad. They give the device an elegant, trendy feel that its clunkier predecessors lacked. Although the display is slightly smaller (3.8in vs. 4.3in) we didn’t really notice the difference during testing. It’s also noticeably brighter, which is a big plus. Other improvements over the PSP 3000 include built-in Bluetooth for syncing with headsets, an improved button layout, a new calendar/clock function, the afore-mentioned 16 GB of inbuilt memory and a re-jigged Media Manager interface. The battery is non-removable this time around, which means you can’t carry around a backup during long commutes. (To be fair, we doubt many people would have purchased a second battery anyway.)

Much like the Nintendo DSi, the PSPgo should not to be viewed as a replacement for its portlier cousin (at least, not yet). Instead, it will be sold alongside the PSP 3000 at a higher premium. It’s this higher price that has caused consternation amongst gamers. With an official RRP of $449.95, the PSPgo is just $50 cheaper than the Sony PlayStation 3 Slim, which comes with an inbuilt Blu-ray player, let’s not forget. By contrast, the PSP 3000 retails for a much more reasonable $279.95. However, the real fly in the ointment is the price of games.

Rather cheekily, Sony is charging exactly the same price for PSN game downloads as their UMD equivalents (e.g. Gran Turismo will set you back $59.95 whether you download it or buy a physical copy from a store.) We think this is quite unfair to consumers, considering there are no packaging or distribution costs involved — not to mention retailers, who take a significant slice of the profits. Think about it: would you rather buy the disc version complete with fancy box and instruction manual, or the digital version that only exists on your hard drive? Sony seems to think you’ll be happy to pay the same price for either.

Personally, we think around 20 per cent should have been shaved off the RRP of each PSPgo game. If nothing else, this would have given prospective PSP buyers an incentive to go for the new model over its older sibling. But hey, we’re sure Sony knows what it’s doing. It’s not like they’ve ever made a hardware blunder in the past — right? On the plus side, the PlayStation Store offers more variety than UMD discs could ever provide, including movies, game demos and TV shows. It cannot be denied that digital distribution is where the future of gaming and entertainment lies.

Depending on your viewpoint, the PSPgo handles as well, or as badly, as the PSP 3000. Once again, Sony has neglected to include a right analogue stick on the device. This can be quite detrimental to gaming, especially when playing 3D action titles that require simultaneous running and aiming. Naturally, the unit’s reduced size may take some getting used to for large-handed roustabouts, but we got used to it pretty quickly. In short, if you had no problems with the PlayStation Portable or its successors, the PSPgo will offer a pretty smooth ride. We only wish it were cheaper.