A turntable with a little extra. 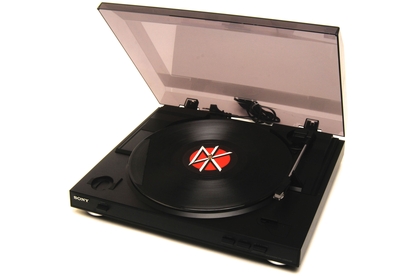 As an enthusiast device, the PSLX300USB's advantages lie in its ability to digitally encode vinyl via computer. For connecting directly to a home audio setup, there are better options.

Sony’s PSLX300USB is a turntable with a little added pizzazz in the form of USB connectivity. It isn’t as feature-laden or as well built as some other models we’ve come across, but as a device for copying your old, damaged vinyls to PC it’s a god-send.

Despite the ubiquity of CD, there are plenty of albums that have never made it to the realm of digital music. Of the vast number of albums produced in the 1960s alone, you’d be very lucky to find half easily available on CD. But you can still find many of them in record shops and second-hand stores in their original format — vinyl.

Plenty of new albums are released on vinyl as well. It’s enjoying a resurgence among professional disc jockeys and music lovers. With this in mind there’s plenty of reason to be considering a turntable — especially one with the added versatility of USB connectivity.

We would have liked it to support FLAC encoding or at least 320Kbps MP3s. However, the audio cleaning filters work and can be used to remove vinyl’s characteristic clicks and pops.

The turntable uses a standard USB audio codec, however, so you’ll be able to use alternative software if you wish. But you will be unable to directly play records via your PC without a lot of fiddling, thanks to Windows’ habit of completely diverting sound to a connected USB audio device. If you have the smarts to set the turntable as an input and output via your normal audio system you’ll be successful, but it’s an arduous process.

If you’ve got no need to copy your vinyls to PC then this turntable loses some of its appeal. It does have a stereo RCA output for direct connection to an amplifier and sound system, but a dedicated turntable will probably have more functionality and better build quality and will most likely be cheaper.

It’s quite a simple unit, thankfully, so there’s not much that can go wrong with it. You have to stretch the rubber belt when setting it up, but apart from that it’s fire-and-forget. The build quality isn’t spectacular: the unit has a rather plastic, flimsy feel and the dust cover is thin and scratch-prone. It's fine at spinning records, though, with a switch for selecting either 33 or 45 RPM.

If you intend to use this turntable purely as an analog turntable connected to a hi-fi system there are better options out there. If you’re using it to bring your old record collection into the 21st century, it's a very capable and useful device.