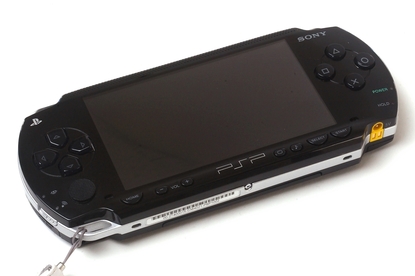 Sony have certainly made a giant leap forward in handheld gaming and I'm sure Nintendo are keeping a close eye on them, but while the games are top notch, the multimedia components could have been better and far more flexible. Still, she's a sexy beast of a machine that's earned the lust of gamers everywhere and justifiably so.

The world of handheld gaming has been owned, patented and dominated by the Nintendo Game Boy franchise for as long as anyone can remember. The Atari Lynx, the Sega Game Gear and various little known consoles have all had a shot at toppling Nintendo but as time went on, they all fell by the way side and the Game Boy remained.

Sony has a hard task ahead of them. They have created quite a revolution in handheld gaming with the PlayStation Portable, making a console that does things that have to be seen to be believed, but whether they will have the following that will affect the Game Boy sales remains to be seen. Somehow, I don't think Nintendo is sweating just yet.

The PSP is a demi-god of design with a widely appealing aesthetic dominated by its 16:9 4.3 inch screen. The usual Playstation control buttons live on the right of the unit with the direction pad on the left. There is also a small nub on the bottom left of the unit which acts as an analog control stick and the volume controls and start/select buttons are on the bottom of the face, below the screen. The face of the unit is finished in a glossy black plastic with clear plastic shoulder buttons and a matt black finish adorning the rear of the unit. The whole design screams "buy me, own me, love me, I'm high-tech" and appeals to the geek in us all.

The PSP isn't just a gaming device. It's a multimedia device capable of playing video, viewing JPEGs and listening to Mp3s. Games, audio and video are delivered via 1.8G UMD discs inserted into a tray ejected from the rear of the device and resembling a mini-disc. This proprietary format was designed specifically to stop video game piracy as the discs are rather difficult to copy.

This is the part of the review that gets a bit technical. The PSP runs on a CPU core, two graphics cores and a sound core with a separate engine for media playback. The CPU is 32-bit with a 128-bit bus and 32MB of memory. It has a bus bandwidth of 2.6GBps and has a vector unit that runs at 2.6GFlops. The first graphics core is devoted to 3D curved surfaces, 3D polygon rendering, texture compression, hardware clipping, morphing and various other graphics effects and subroutines required for the second core. The second graphics core is the rendering and surfacing engines which run on a 512-bit bus with 2MB of VRAM. It has a bus bandwidth of 5.3GBps, a pixel fill rate of 664 megapixels per second and can render 33 million polygons per second at full 24-bit RGBA colour. The sound core is a series of reconfigurable digital signal processors running on a 128-bit bus and operates at five giga-operations per second. The audio core can deliver 3D sound, has a multi-channel synthesiser and is capable of a wide variety of audio effects. For those that have no idea what that last paragraph says, don't worry, as not many people do -- but what it translates to is raw power whether it be for gaming or media use and a resource that developers can tap into to bring some of the best games ever seen on a handheld device.

The PSP comes with two rather mediocre speakers which degrade the sound and detract from the overall impressive sound quality. The unit also comes with a set of headphones which, when employed, prove how good the sound can be. Using a high-end set of Hi-Fi headphones like the Sony DMR200 increases the quality further allowing the PSP to show off its range and the stereo separation that the audio core can perform.

The screen is also open faced with no cover so it is particularly susceptible to scratches and smudges. In fact, the whole face of the PSP is a breeding ground for smudges and fingerprints, especially around the control buttons. There have also been many reports of dead pixels on the PSP but thankfully, our review unit didn't have any to speak of.

The controls on the PSP are sturdy and respond well. The analogue control nub has a few issues and isn't quite as responsive as the rest of the controls but it isn't bad enough that it hampers game play too much. The nub is also located a little too far toward the bottom of the unit and as such tends to make the thumbs sore after extended game play.

Dead pixels are the bane of LCD handheld consoles. Both the Nintendo DS and the PSP have had reports of dead pixels but Nintendo has hit back against the problem with their exchange guarantee. Sony on the other hand, has made no such guarantee and when contacted the company stated it has no official policy on the matter. As it stands, if you purchase a PSP, you need to be aware that should the screen be littered with dead pixels, unlike with Nintendo, there is no guarantee that you will get your money back even if the product is still under warranty.

On the up side, the Wi-Fi is very easy to setup and the online gaming quality is restricted only by the quality of the connection and the limitations of the Sony online service. In most of the games we tested, we had trouble finding any players to play against but the few multiplayer games where we did find opponents worked really well with very little lag. There is no voice chat, as far as we can see, but the service is still rather satisfying. One issue with the PSP Wi-Fi that we found frustrating is that the Wi-Fi is not permanently available. You have to flip a switch between the different wireless modes, and attempting to start a game in the wrong mode gives the player a prompt to change the switch. We don't understand why both modes couldn't just be available at the same time without the need for a switch.

Video is handled in two ways on the PSP. UMD video is released by the film distributors, just like a DVD and can be purchased for about the same price as a DVD. These look fantastic on the player and have high quality sound. The other format is MPEG-4 which needs to be re-coded for the PSP. This is generally a giant pain and is yet another unnecessary restriction hampering what could have potentially been the ultimate multimedia device.

Yet another restriction is imposed when viewing pictures on the PSP. The unit only supports JPEG which is mind-numbingly ridiculous. There are so many image formats out there that easily surpass JPEG that it is a real shame none of these are supported. When viewing images the PSP also seems to take a while to load them up, although it does have a neat slideshow feature which looks very impressive on that incredible screen. The detail in the image viewer is unsurpassed by any other photo viewer we have seen. Battery life for the PSP is about 4 hours of game play or around 2.5 hours of UMD video playback. The recharge time is only about 2 hours so most gamers won't have too much of an issue with these times.

The PSP is a revolution in handheld gaming, but it is a little too expensive to topple Nintendo as the king. If you are looking for a great gaming experience, this is a definite option, but if you are looking for a multimedia player the storage issues as well as the restricted file formats drive the PSP out of contention. The Cowon A2 or the Zen Vision are probably more up your alley. This is, unfortunately, a flawed product but if those few things are expanded upon and fixed and if the price becomes more competitive, the PSP or its future iterations could give the Game Boy a moment of pause.