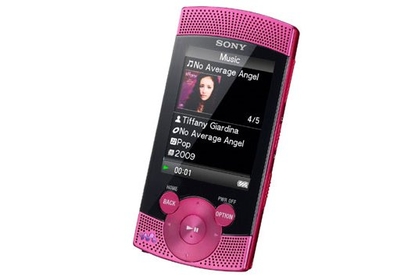 Sony's mid-level MP3 player competes with the iPod Nano, and while it is superior for video or photo viewing, the interface doesn't hold a candle to Apple's tried and tested iPod menu system. If you're a multimedia enthusiast and don't mind the lack of Wi-Fi , we'd seriously consider getting the Sony NWZ-S544 instead of Apple's Nano.

Sony's NWZ-S544 is an 8GB MP3 player/portable media player designed to compete with Apple's iPod Nano. It offers a better screen for watching video or playing movies, but it doesn't stand up to the iPod's polished music system.

The Sony NWZ-S544 sports a pleasing design. We tested the pink model, but a variety of colours are offered. The MP3 player is sturdy but still relatively light, so it doesn't add significant weight to your pocket. The matte finish over most of the body seems to be good at preventing scratches.

Rather than a use a touch screen like the iPod Touch does, the Sony NWZ-S544 relies on a five-way navigation pad and physical buttons. Volume control is handled by a side-mounted button which sits next to a hold toggle and a slider to switch between headphones and the internal speaker. Navigating the menu system isn't too difficult but we'd still place the NWZ-S544 behind the iPod Nano in terms of usability, especially for navigating extensive music collections.

The Sony NWZ-S544 MP3 player has a 2.4in, 320x240-pixel screen that is sharp and bright. Sometimes it can seem like there is a lack of colour depth, and the reflective screen is annoying in bright daylight. However it's a better display for watching videos than the Nano's because of its larger size.

The Sony NWZ-S544 has inbuilt stereo speakers that add noticeable size — roughly an extra centimetre on the top and bottom. The speakers allow you to use the NWZ-S544 as an alarm clock, but also let you watch videos in quiet environments. At lower volume levels the audio is reasonable — slightly tinny but clear. Higher volumes introduce significant distortion though, so if you're in a noisy environment the speakers won't be much use.

The bundled earphones of the Sony NWZ-S544 are underwhelming. We liked the headphones bundled with the pricier Sony X-Series a lot more (the X-Series MP3 player and headphones work in tandem to offer noise cancelling) . The Sony NWZ-S544's earphones are adequate for listening to the inbuilt FM radio or low quality MP3s, but you'll notice the improvement if you switch to a better pair.

With a pair of good quality earphones or headphones plugged in, the Sony NWZ-S544 can produce a clean, crisp and musical sound. The MP3 player has a wide volume range — we were easily able to reach uncomfortably loud volumes without distortion — and the integrated EQ allows adjustment of bass and treble.