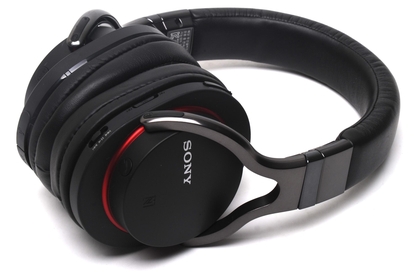 Sony’s MDR-1RBT headphones sound equally good whether you’re listening wired or wirelessly. Hooking up with Bluetooth does give a bit of a bump to bass and treble, too, as well as the convenience of no cords. The convenience of NFC - if you’ve got a compatible mobile - is even better.

Sony’s got a long and reasonably illustrious history in consumer headphones. Anyone who was a teenager in the 2000s knew the company’s ultra-cool wrap-around Street Style ‘phones, and the $99 MDR-7506 monitors have a well-deserved home in recording studios and radio stations around the world.

In recent years we’ve kept up with Sony’s trend towards modernising and modifying its headphones, adding noise cancelling, Xtra Bass, or balanced armatures. Although usually expensive, we rarely have any significant complaints about Sony headphone sound quality — our complaints are generally around the headphones’ size, bulk, and annoying tangled cords.

The Sony MDR-1RBT is the Japanese electronics powerhouse’s attempt at making wireless headphones even more convenient — with Bluetooth 3.0 baked in, an integrated microphone, on-body controls, a rechargeable battery, and a Near-Field Communications chip.

This review assumes you know what NFC is, and assumes that you’ve got a NFC-enabled mobile phone to make best use of the MDR-1RBT with. If you’re not sure what it is or if you’ve got it, read this primer on Wikipedia.

The Sony MDR-1RBT is, to us, a nearly perfect-looking pair of headphones. They’re just the right size to be worn comfortably in the office, but are small enough that they can be worn around the neck or quickly thrown into a bag when travelling or commuting.

The nearly-flat cylindrical shape of the matte black Sony-badged ear-cups, with a larger oval holding the over-the-ear ear-pads, looks modern and attractive without being unnecessarily gaudy. There’s a bright red satin-metallic accent running between the two parts of each ear-cup, and it looks great. Dark satin gunmetal connects the ear-cups to the headband, which also has lashings of the dark finish.

The telescoping head-band accommodates heads large and small, and it’s got just the right amount of flexibility. Each ear-cup swivels up and down and left and right so it’s easy to wear one ear-piece but rest the other elsewhere on your head. The head-band and ear-pads are wrapped in extremely soft, pliable, but breathable leatherette.

Being wireless, the Sony MDR-1RBT necessarily has some controls onboard. The left ear-cup only has a power button, although it’s also where you’ll find the integrated microphone, 3.5mm stereo analog input, and micro-USB port for charging the internal battery.

The right ear-cup is where all the action happens. There’s a digital volume control, play-pause/skip/rewind combo jog switch, phone call button, and most importantly the NFC on/off switch.

NFC is absolutely the killer feature of the Sony MDR-1RBT. Leave the NFC switch on, please. The headphones go into a power-saving standby mode when they haven’t been used for a while, so you aren’t unnecessarily draining the battery.

When you want to use the headphones, all you’ve got to do is touch your smartphone’s NFC chip (usually around the back of the phone in the middle or up the top) to the right ear-cup of the MDR-1RBT. You’ll either get a prompt on your phone’s screen confirming the connection, or it’ll happen automatically, but that’s all you need to do. It’s barely more complicated than actually plugging in the stereo jack.

We tested the Sony MDR-1RBT both over Bluetooth 3.0 (via NFC, of course) and through the bundled 1.2m stereo 3.5mm cord, on a Google Nexus 4 and a Sony Xperia Z.

Sound quality is slightly punchier when you’re listening through the Bluetooth connection, we presume because the headphones receiving a compressed signal and applying a bit of equalisation to it. Other than that, we’re happy to report that both connections sound great — we couldn’t tell wired apart from wireless in the vast majority of our listening tests. Listening with the cord, too, doesn’t drain any battery.

For the most part, the MDR-1RBT headphones have relatively flat frequency response — there’s a definite spike to high treble frequencies, and a lesser spike for mid-bass, but there’s none of the mid-range hole that many wireless headphones seem to suffer from. Maximum volume is enough, rather than being excessive, when you’re listening over Bluetooth, although being relatively low impedance they’re easy to crank up loud when you’re listening with the cable.

Great detail reproduction means you’ll be able to hear background instruments and ambience in songs that you just can’t get from cheaper, lesser headphones. The headphones always sound clean and detailed, although they can be a little too neutral in some particular tracks when you’re using the headphone cable — this is easily fixed with some minor EQing though.

Battery life is perfectly acceptable. We had the headphones playing music for 24 hours straight over Bluetooth at a moderate volume, and still got a further 5 or 6 hours out of our initially-fully-charged 'phones upon further listening — which lines up perfectly with Sony's quoted 30 hour figure. Charging time is a not-so-great 6 hours, but that's easily remedied by leaving them plugged in overnight.

The integrated microphone is also perfectly acceptable. You can use it for voice commands accurately — we placed and received calls through Android's voice activation, and ran searches through Google Now, without the phone's software misunderstanding what we were saying.

We were able to move around 10 metres away from our Bluetooth source — Sony's Xperia Z, in our testing — before the headphones began to break signal and drop out. This is more than enough range in the real world; we could move around our office while wirelessly listening to music.

About our only gripe with the Sony MDR-1RBT is, considering the price tag, we would have liked to see some active noise cancelling circuitry inside. We know the MDR-1RNC has noise cancelling, but then you lose out on the brilliantly convenient NFC and Bluetooth 3.0. As it stands, the MDR-1RBT is almost perfect, and will be our ongoing benchmark for ease of use in wireless headphones.