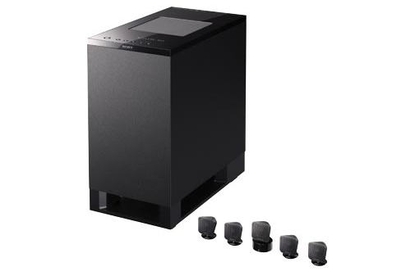 As a surround system the HTIS100 works well — positional audio sounds great. Treble is an equally strong point, but the system is let down by bloated, muddy sounding mid-range and bass from the subwoofer.

Sony's latest Invisible Theatre package, the HTIS100, is a very unobtrusive system. Its main allure is its incredibly tiny speakers. Only as large as golf balls and finished in matte black paint, the speakers can be placed almost anywhere within a large room and not stand out. The system's control unit — which also functions as the subwoofer — is quite tall but doesn't take up much floor space, so slotting it into a cavity may be possible.

The three HDMI inputs on the HTIS100 allow you to attach as many high-definition devices (like a Panasonic DMR-XW300, a Sony VAIO TP2 and a Panasonic DMR-BW500) as you could ever conceivably want simultaneously. The HTIS100 can switch between them while outputting through an HDMI port or component connector. Analog inputs are also included, with two sets of component and a single composite connector. Audio is handled by three optical digital ports and one coaxial digital port as well as a single additional analog input. This is a lot of connectivity.

Setting up this unit is incredibly easy. Just place the combination subwoofer/control unit out of the way, find appropriate places for the speakers, then run the wiring to the control unit. The wires are terminated with phone jack connectors, so they plug in easily — no fiddling required.

The only conceivable downside might be that there's no option to easily lengthen the cables. This shouldn't be a problem for the vast majority of users since the cables are incredibly long. Indeed, the front speakers' cables are a more-than-acceptable six metres long; the rear speakers have a whopping 18 metres of cable attached!

Once you've finished setting up the system, it's easy to start using. Confusingly, however, the system's screen is situated on the top of the control unit, so you'll need to be standing almost directly in front of the unit to see it.

Video play-through is seamless, and switching between multiple digital inputs is easy. Pictures looked no worse than when played directly from their original sources — we used an LG 42PG60 to look for any flaws. 24p support for cinematic playback of Blu-ray discs is an added bonus.

Since the satellite speakers are so small, there's no chance of them reproducing bass or mid-range frequencies. That job falls entirely to the combination subwoofer/control unit.

As expected, treble was definitely the strongest point of the unit. The satellite speakers are rated at 50 Watts, but whether this is accurate is questionable. However, the fact remains that even when pushed to uncomfortably loud listening volumes, the tweeter-based satellite speakers continue to output treble without any distortion. Music doesn't sound harsh at all, with a slight preference towards blurred, smooth reproduction.

Bass and mid-range sound were a little more difficult to quantify. Mid-range frequencies are still directional — they can be pin-pointed within a room by a listener. Since there's only a single source of mid-range noise in this system — the subwoofer unit, which sits off to one side — the balance of sound, especially dialogue, is thrown off. Listeners might benefit from putting the control unit directly under the system's central speaker, though then it ruins the 'invisible' theme.

Mid-range sound is bloated and muddy from the unit, with a noticeable gap between treble and middle frequencies. In addition, it's quite underpowered in comparison to the powerful treble frequencies from the satellites. There's also no ground-shaking bass here, and no evidence of much lower frequency extension.

The system's surround sound is quite immersive, however. Plenty of Dolby Digital options abound, allowing users to tailor the setup. Individual levels for treble, bass and mid-range can also be altered, giving further flexibility. When we listened to the lobby scene in The Matrix — our preferred test for surround sound speakers — we found that positional sound was executed well and with great clarity.

The HTIS100 is a great system in terms of treble reproduction, but it's not so fantastic for mid-range and bass. Forget listening to classical music or anything with complex mid-range notes, but for movies and surround sound audio the HTIS100 is a decent option.