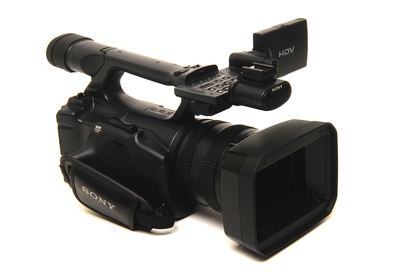 The HDR-FX1000 is a worthy successor to the FX1/FX7. It will make an ideal stepping stone into the world of professional video, as well as a solid secondary unit for established videographers.

Despite having been all but abandoned by the consumer-level camcorder industry, HDV remains the high-definition format of choice for serious videographers. No other codec offers the same level of support and reliability, nor the comforting familiarity for those reared on digital tape. The HDR-FX1000 continues Sony’s commitment to this veteran format, offering professional HD video in a MiniDV-sized package. While it lacks some of the high-end features needed for broadcast-quality productions (most notably XLR inputs and an interchangeable lens) it remains a solid entry-point for budding freelancers. From its user-interface to its video performance, every facet of this camera is steeped in sheer class.

Sony is touting the HDR-FX1000 as a successor to the HDR-FX1, but it actually shares more in common with the HDR-FX7 (including a 3-ClearVid CMOS sensor chipset, rather than 3CCD). Curiously, all three models are currently listed as available on Sony’s website, with the FX1 expected to be phased out in the coming months. However, the HDR-FX7 will apparently be sticking around with a reduced price tag of $4799. This means you’ll have a choice between two very similar camcorders which are separated in price by over a grand. The question is: does the HDR-FX1000 offer enough improvements to justify the extra premium? Yes — by a hair.

At 1037k, the HDR-FX1000 shares the same effective pixel count as its FX7 predecessor, although the optics used to get the job done have all changed. In place of the FX7’s Carl Zeiss Vario-Sonnar T* lens, the HDR-FX1000 marks the debut of Sony’s new G Series lens: a fixed 72mm lens with a focal distance of 4.1 - 82.0mm. Designed specifically for this camera, the G lens has been optimised to complement the FX1000's image-processing technology, with a wide-angle performance of 29.5mm (35mm equivalent) and a low-light sensitivity of 1.5 lux. This is a significant improvement over the HDR-FX7, which offered a minimum illumination of 4 lux.

In addition to its new lens arrangement, the FX1000 benefits from a trio of enlarged sensors, which have jumped from 1/4in (as found on the FX7) to 1/3.13in. Its optical zoom, meanwhile, remains unchanged at 20x, though this remains impressive for a prosumer-grade camcorder (most high-end models sport underpowered zooms due to their wide-angle lenses). What all this means is that the HDR-FX1000 is more adept at capturing crisp, noise-free video than the FX7, particularly in low-light environments. If you’re ultra-serious about video — which anyone considering this unit should be — it is almost certainly worth the extra dosh.

Unfortunately, our HDR-FX7 test footage went missing during the recent exodus to our new office, so we were unable to do any side-by-side comparisons. Nevertheless, we can confidentially attest to the HDR-FX1000’s superior performance. When we shot outside at dusk, the night sky looked sumptuously rich, with an inky blue quality that evoked Michael Mann’s Collateral. By contrast, we recall the FX7 struggling to produce clean images under similar circumstances. There can be no doubt about it: the FX1000 improves on its award-winning predecessor by leaps and bounds.

But the improvements don’t end there. The FX1000 also benefits from a 25p progressive scan mode (in fact, it’s the first HD handycam from Sony to offer such a function). This essentially mimics the look and feel of celluloid and will be a huge boon for amateur film-makers who want their projects to appear as cinematic as possible. It also comes with CinemaTone Gamma and CinemaTone Color filtering options, which further enhance images with deeper, film-like tones. While not ideal for all situations (free-roaming handheld footage tends to suffer from ghosting, for instance), the 25p progressive scan mode is an excellent option that broadens the scope of what the cameraman can achieve. Whether you’re aiming for the portentousness of Cannes or the bogan joviality of Tropfest, it’s a great mode to have at your disposal.

Another welcome addition to the FX1000 is its servo-controlled iris ring, which joins the focus and zoom rings on the lens barrel. Naturally, this makes the unit a lot more user-friendly when it comes to manual adjustments, with all major controls right there at your fingertips. One caveat is that the zoom ring still lacks a fixed beginning and end point, which is something we criticised the FX7 for. We’re not sure why Sony insists on eschewing this feature, but it makes minute zoom adjustments needlessly difficult. Naturally, a zoom rocker is included on the shoulder of the unit, but it’s small consolation.

In a nod to Sony’s consumer handycam range, the HDR-FX1000 also comes equipped with Smooth Slow Record, which captures video at a quarter of its usual speed. However, due to limitations of the tape format, it only works in short, 6 second bursts, which translates to 24 seconds of footage. While this makes it a handy tool for previewing sporting techniques and the like, it isn’t particularly useful for anything else (although you could cut together rehearsed slow-mo footage from multiple angles, we suppose).

Another improvement worth mentioning is the inclusion of three neutral density filters: 1/4 ND, 1/16 ND and 1/64 ND. These give the user greater control over the distribution of light wavelengths and colours in an image, all at the flick of a switch. Indeed, the ability to acquire fast ‘hands-on’ results is one of FX1000’s main strengths, with almost every control represented on the camera’s body. (Gain, shutter speed, exposure, white balance, colour adjustments, audio control — there’s a dedicated button for all of 'em). It also boasts three programmable buttons that can be assigned specific functions. In addition to making you look suitably professional, this also helps to get the results you need quickly, as opposed to fiddling around with an unwieldy menu screen for ages on end. Anyone who knows their way around a high-end camcorder will be more than satisfied by the FX1000’s intuitive user-interface.

One area that Sony has failed to improve upon is the FX1000's stills image mode, which remains identical to the FX7. With a maximum resolution of just 1.2 megapixels, its output cannot hope to match a dedicated stills camera, or even most consumer-level handycams for that matter. (The Sony HDR-SR12 E for example, sports a 10.1-megapixel stills mode.) The included Memory Stick slot makes it easy to store and transfer photos, but we can't imagine why anyone would bother.

In terms of design, the FX1000 could almost pass for one of its predecessors, though a closer inspection reveals vastly improved build-quality. Everything just feels sleeker and more robust on this model, with a nice balance between portability and heft. The sense of class has also been carried over to the LCD display, which is a damn sight better than the typical prosumer offering.

Unlike the Canon XH-A1 — which seemed almost embarrassed by its LCD — the FX1000 sports a 3.2in flip-out display with an impressive screen resolution of 921K pixels. It worked quite well in bright sunlight and could be relied upon when making focus adjustments. Consequently, even video-snobs who stick exclusively to viewfinders may find themselves peering at the LCD display. (Stubborn traditionalists will be equally impressed by the Xtra Fine viewfinder which sports a massive pixel-count of 1.2 million.)

On a final note, we should mention that the Sony HDR-FX1000 does not offer XLR inputs. Although its audio capabilities are an improvement on the FX7, they still pale in the face of more accomplished units, such as Canon's rival HDV model, the XH-A1. On the plus side, the inbuilt 2ch stereo microphone does a good job of capturing audio in all but the noisiest of situations, while the inclusion of a 3.5mm external mic jack is expected but appreciated nonetheless.