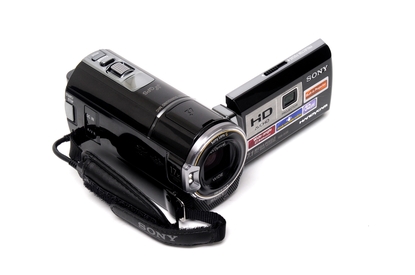 The stand-out features of the Hanycam HDR-PJ30VE are its Full HD video recording and inbuilt pico projector. As far as cameras with built-in projectors are concerned, this one is among the best, but it's a product that might only appeal to hardcore gadget collectors.

I must confess: I'm not a regular camcorder user. (When you look at the sample footage embedded in this article that will become obvious to you — Ed.) I prefer the convenience of a digital SLR or compact camera instead, and I rarely have a need to shoot just video. In fact, there is very little that would tempt me to buy a camcorder these days, even if they are capable of capturing better motion than digital cameras. Sony must know that it needs to do something a little extra to entice users to buy dedicated video cameras these days, and perhaps that's why its Handycam HDR-PJ30VE ships with an inbuilt pico projector.

I found it to be a bit of a novelty feature at first, but the more I used the HDR-PJ30VE, the more I realised that it could be a great way to share just-taken videos with family and friends. Simply switching on the projector and pointing it at the nearest available wall space seemed a lot more convenient than trying to find the HDMI cable to hook up the camera to the TV or plugging the SD card into a notebook.

The projector is mounted on the front of the LCD pull-out screen and it has a modest brightness rating of 10 lumens. It's not very useful in well-lit rooms, so it has to be used either at night with the lights off or during the day with the blinds down. However, the brightness of the output will also depend on how close to the wall the projector is. The best and brightest results are obtained from around 1m away.

From 1m away, the projector supplies an image that is just over 40cm wide. From around 3m away, the projected image is over 1.3m wide. Unless you have a TV bigger than 50in, then the projector will be able to supply an image that's a little bigger than that. Its contrast won't be as good though. Detail will be lost when projecting videos with dark scenes from this distance and colours will look a little pale overall.

The projector's focus can be adjusted by the slider at the top of the screen, and I had no problems finding the correct focus regardless of how far away from the wall I was projecting. The main problem with the projector is finding a clear (and preferably white) wall with no obstructions in front of it. A tripod should also be used so that the projected image is kept steady and straight. Because the projector is on the LCD screen, it can be tilted, but this will skew the picture. Audio from the camera's speaker isn't great, but for casual viewing purposes, it will do just fine.

As for the Handycam's picture quality, I found it to be very clear and mostly vibrant. It handled motion very well, zoom operations were smooth and its audio recording was excelelnt. It has an Exmor R CMOS sensor that's capable of capturing Full HD video using the AVCHD format, and it has a 12x optical zoom lens with a 29.8mm wide angle. Some of the camera's features include facial recognition, a smile shutter, optical image stabilisation, a built-in LED for shooting at night (there is also a hot-shoe), built-in 5.1 audio recording (there is also a jack for an external mic) and a built-in GPS module. All of these features worked properly during my tests, especially facial recognition and the GPS location data, which was spot-on.

While the operation of the Handycam was easy for the most part, I did find the user interface a little cumbersome. The touchscreen wasn't always responsive and playing back files was a little awkward as I had to sift through 'events' or 'locations' as ordered by the camcorder. The camcorder can record video on its integrated 32GB of flash memory, but it also has an SD card slot. After recording a bunch of videos to its internal memory, I attempted to copy them to an SD card, but I failed. The error message given by the camera was not helpful. Nevertheless, I had no problems transferring videos to a notebook by using a standard mini USB cable.

After using this camcorder for a while, I didn't find the inbuilt projector to be that much of a novelty — I actually found it useful and it was my preferred method of watching recorded footage. However, my place has plenty of clear wall and floor space, which allows the projector to be used a lot easier than it would be in a more cluttered environment, and this means it can't be used anywhere. In the end, the inclusion of a projector won't entice me to buy this camcorder, but it's definitely an interesting product and one that hardcore gadget fiends might like to check out.