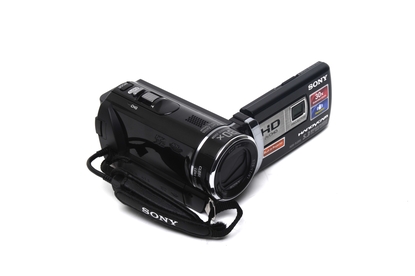 Sony's Handycam HDR-PJ200E is a capable video camera that's tiny and barely a hassle to carry while on long trips. Its capture quality is more than decent and it features a built-in projector so that you can see the day's recordings in a large size on a wall wherever you are. It's more than a novelty, and definitely fun to use.

The Sony HDR-PJ200E is a tiny camcorder with a built in projector. It performs well and is a lovely gadget for frequent travellers: capture some neat footage during the day, then at night project the results on an empty wall wherever you happen to be staying. Its body feels a little too creaky in its construction, but it's very light and with an almost petite-like size, which means it can easily be carried in a pair of cargo pants or any other over-sized pants pocket.

Technologically, the HDR-PJ200E features one of Sony's Exmor R CMOS sensors, which is 1/5.8in in size, it uses Sony's BIONZ image processor, and it has a 25x optical zoom lens. Like all good camcorders, you get a pull-out screen and touchscreen controls, and there are controls on the body that make it easy to zoom and initiate recordings, and to switch from video to stills. The battery compartment is at the back and the SD card slot is accessible on the bottom-right of the body. Behind the screen is where the pico projector sits, and it can be activated by pressing a button on the body, with interface navigation controls being the zoom rocker and photo shutter button.

Using the camera can be uncomfortable if you have big hands, or even normal-sized hands. The strap almost didn't have enough velcro to grip when i widened it to fit my hand, but it somehow held together and i managed to never drop the camera during my extensive test period. Most of the time I found it easier to record video by holding the camera over the strap instead. Furthermore, hitting icons on the small 2.7in, resistive touchscreen can turn into a cumbersome event. I had trouble navigating the on-screen menu system, often stumbling into the wrong sub-menu by mistake.

I recorded video in HD mode using its standard quality setting. Its results turned out clear and vibrant when viewed on a computer or a big-screen TV. It's a camcorder that can handle heavy motion quite well, meaning you can use it to shoot action as well as static scenes and while moving the camera around. For example, when I recorded a run up a couple of flights of stairs, the excessive up and down motion was shaky, but it didn't cause the image to tear and, in fact, the end result was quite watchable. It's definitely a good camcorder overall and well worth considering if you shoot a lot of video. It provides results that are better than what most digital still cameras can capture.

While the built-in projector may be a bit of a novelty to some, I enjoyed it a lot. Being able to just point the camera at a wall and view the days clips was not only convenient, it also brought a bit of enjoyment to the whole clip-watching experience. It made it a little more exciting. The catch is that the best results will be had in a dark room and on a white wall. You'll also need to find a way to rest the camera so that it's pointing in the right direction and so you won't have to hold it. For best results, you'll need to use a tripod.

It's quite simple to invoke the projector mode and focusing is by way of a slider that sits along the top edge of the camcorder's screen. From a distance of 240cm, the projector will produce a screen that is 116cm across, and 65cm high. It's not home cinema size (or quality, for that matter), but it's very comfortable to view and the projector's definition is good enough to view fine details. It's not overly bright though, which is understandable considering the unit's very small size, so you'll get the best results when viewing it in a darkened room and with the lights off. There is a built-in speaker on the camera that you can rely on for audio and you also get a little remote control.

Overall, the Sony Handycam HDR-PJ200E is a fine HD video camera for those of you who want something a little different to the norm. Its small size and built-in projector are the main drawcards, but it's also video camera that can capture video at a very high quality. It's perfect for taking on holidays, or just out and about in general. Be wary of windy conditions though as they can wreak havoc on the audio.

This isn't the first time I've reviewed one of Sony's camcorder-projector units. Also check out the Sony Handycam HDR-PJ30VE.