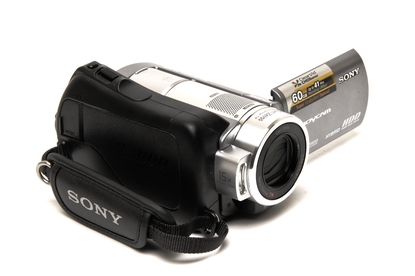 Sony's DCR-SR220 offers impressive picture quality and versatile recording options, along with a host of user-friendly features. If you value lots of storage space over full HD resolution, then this standard-def offering has plenty to recommend it.

The DCR-SR220 is the headlining star of Sony's standard-definition handycam line-up. In other words, it's a big fish in an increasingly small pond. With high-definition video beginning to dominate the consumer market, some of you may well wonder how a $1399 standard-def camera could possibly be worth that amount of money. The fact of the matter is that SD video remains a viable format that will look more than adequate on your LCD TV. In some cases, such as the SR220, it can even look superior to similarly priced HD models. As such, we have no problem recommending this handycam to a world that seems eager to leave its ilk behind. There's still life in the old dog yet.

The SR220 manages to strike the right balance between user-friendliness and high-end functionality. With a 60GB hard drive capable of recording up to 41 hours of continuous footage, and a premium Carl Zeiss Vario-Sonnar lens with a 15x optical zoom, we found it to be both capable and versatile when it came to capturing video.

The 2.3-megapixel CMOS sensor did an admirable job of capturing sharp, colourful images; especially in comparison to most other standard-def units we've looked at. While it can't compete with pricier models such as the HDR-SR11 (review forthcoming), most users will be more than satisfied with the majority of their output. (We even found noise levels in dim lighting to be less problematic than usual.)

These days, practically every HDD camcorder on the market has been hit with the 'hybrid' stick; offering a secondary recording option (such as DVD or removable flash memory) in addition to its inbuilt hard drive. The SR220 is no exception, with the included memory stick slot boosting its storage capabilities by up to 16GB. Conveniently, you can also transfer your data from the hard drive to a memory stick, which is a great way to free up memory while on the road or transfer data to a compatible computer with a minimum of fuss.

Another handy feature found on the SR220 is Face Detection. This is basically the 'new black' in digital imaging, with most mid-range camcorders and practically all compact cameras sporting a version of this technology. As its name implies, face detection allows the camcorder to 'see' human faces, before adjusting the focus and exposure to present skin tones as accurately as possible. Rather coolly, an on-screen indicator frames each subject's face, letting you know who has been detected and when (up to eight faces can be targeted at any one time).

Visually, the SR220 certainly isn't the fanciest camcorder on the block, but it manages to impress where it counts; offering lightweight and highly portable dimensions. We were equally impressed by the build quality, with the assorted buttons laid out in an intelligent manner. Likewise, the LCD's touch screen interface is very easy to get to grips with, allowing first-time users to cycle through different modes and functions without needing to consult the manual. We remain steadfast fans of this operating system and find it far superior to the miniature joysticks favoured by most of Sony's competitors. With that being said, larger fingered individuals may occasionally find themselves prodding the wrong icon.

It's not all rosy though. As has become the norm for consumer-level camcorders, the SR220 lacks a viewfinder to supplement its 2.7in LCD screen. This can often prove frustrating in sunny conditions when the display is difficult to see, or when you are running low on battery life. Normally we'd be willing to overlook this oversight, but when you're paying $1399 for a standard-definition camera, we expect a few extra bells and whistles.

Transferring your videos to a PC is a simple process thanks to the included docking station, which also doubles as a battery charger. This device is particularly handy when it comes to burning DVDs, with the dedicated Disc Burn button making for a simple one-step procedure. (An optional DVD Burner called DVDIRECT can also be purchased separately, which allows you to perform the same function without a computer.) If you're not the most technically proficient person in the world or prefer to make videos with a minimum of fuss, this feature is sure to be appreciated.

If you plan to extensively edit your movies however, you'll need an editing package that's compatible with the MPEG format. Sony has included a 30-day trial of its Vegas Movie Maker software to get you started, though any recently released editing program should work in its stead if you decide not to buy the full version.