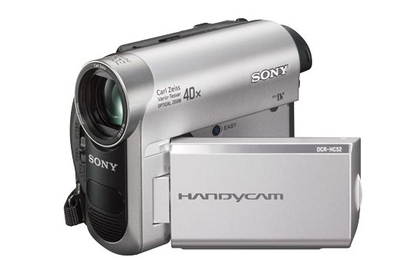 The Sony DCR-HC52 is a perfectly capable little camcorder, but its recording format is beginning to show its age. Frankly, your money would be better spent on something younger and hipper. (Mini DV, your time is nearly up.)

The Sony DCR-HC52 can be viewed as both the elderly gent and the squalling infant of its handycam family. Recording standard-definition video to Mini DV tape, it’s a stubbornly old-school device that also happens to be the company's entry-level product. While somewhat antiquated compared to other video formats, it remains a reasonable choice for people who want a dirt-cheap camcorder for occasional home movies. (It also comes with a 40x optical zoom, which is sure to come in very handy.)

However, we feel that most users would be better off spending a few extra dollars on fresher technology. For just $50 more, you could pick up the Kogan flash memory-based Full HD 1080p Video Camera, or Sony’s hybrid DVD/Memory Stick DCR-DVD610 model. There are plenty of newer and more exciting options on the market that cost around the same price as the DCR-HC52. In other words, only Luddites and DV traditionalists need apply.

As you’d expect from a sub-$350 camcorder, the Sony DCR-HC52 is not the best looking unit on the block. Bulky, plastic and depressingly drab, it lacks the glossy chic exhibited by its bigger brothers. On the plus side, the unit fits comfortably into the hand and is pleasantly lightweight given its blocky size. We also liked the 2.5in touchscreen, which helped to make menu navigation simple and intuitive. The inclusion of a viewfinder is also a nice touch — this means you can close the LCD and save on battery life. All up, the DCR-HC52 camcorder shouldn't give you any problems during operation, regardless of your experience level.

So what about video quality? Unlike the majority of Sony handycams which use CMOS technology, the DCR-HC52 camcorder sports a 1/6in CCD sensor with an effective pixel count of 400k. Single-CCD sensors are considered inferior to CMOS arrangements due to their poor reliability in low lighting. This is especially true of entry-level camcorders which typically use smaller, low-grade components.

When we tested the Sony DCR-HC52 in a dark room, the video it captured was definitely grainier than we’re typically used to. This led to significant detail loss, with fuzzy subject outlines and distracting noise levels. While an infrared Nightshot mode is included, it only records in black-and-white and suffers from what we like to call ‘freaky eye’ syndrome. It's therefore best avoided, unless you're making a schlocky horror movie in the vein of The Blair Witch Project.

Fortunately, the camcorder performed a lot better in optimum lighting, where its output remained reasonably sharp and vibrant. It is therefore best suited to outdoor activities such as BBQs, beach trips and nature hikes. Basically, as long as lots of sun is involved, the results shouldn't disappoint.

One of the Sony DCR-HC52’s strongest selling points is its 40x optical zoom. This is an incredibly useful feature that will let you get nice and close to the action: whether it be a distant mountaintop or a shy monkey at the zoo. Just bear in mind that you’ll probably need to invest in a tripod to make the most of the zoom function; otherwise your footage will suffer from camera-shake.

Curiously, the DCR-HC52 does not come with a USB or FireWire cable in the sales package. If you want to transfer your movies to a computer, you’ll need to purchase one of these cables separately.