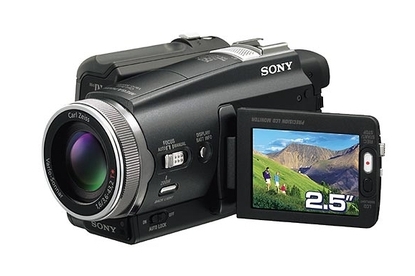 The new DCR-HC1000E camcorder replaced Sony's previous mid-range MiniDV model, the DCRTRV950E. It has the majority of its predecessor's features, but Sony has made several operational and design decisions that may not appeal to everyone.

The DCR-HC1000E is extremely compact for a three-chip camera, with a top-loading tape compartment and a new 90-degree twisting grip. A slider has replaced the previous model's zoom rocker, but the camera offers a lens ring that can be used for both zoom and focus. It also uses the touch screen LCD that's standard on Sony camcorders, which cuts down on button clutter and can be used in daylight. It's not popular with everyone, and is an inch smaller than the DCR-TRV950E's viewfinder, but does allow for features like spot focus and exposure (which can be set by simply touching the area on the LCD).

The image sensor behind the Carl Zeiss 12X optical zoom is a three-chip unit that provides a high level of light and colour sensitivity. Our test footage was extremely clear and well balanced at the camera's default settings, but image noise started to creep into the pictures during badly-lit indoor shooting. Audio from the poorly positioned internal microphone was a little dull, but this camera features dual inputs and a smart accessory shoe for adding external pickups.

We were disappointed with the internal battery compartment as it limits you to the supplied two-hour battery, and would like to have seen a tilting internal viewfinder. The new graphical menu system also makes camera setup slower, but has more consumer appeal, which is obviously the market that Sony is aiming for with this product.