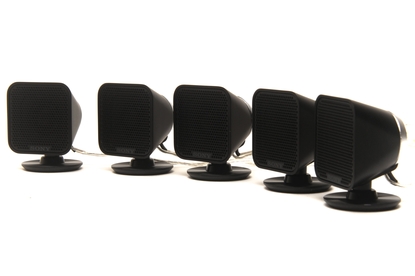 The DAVIS50 isn’t invisible by any stretch of the imagination — the subwoofer sticks out like a sore thumb — but it does allow a lot of flexibility in placement, which might make it attractive to some buyers.

The DAV-IS50 is a DVD home theatre system with Sony’s trademark golf-ball sized satellite speakers and an interesting subwoofer design. It offers a lot of flexibility in speaker placement, but it compromises on overall sound quality. Nevertheless, plenty of functionality means that this is a home theatre system that will capably handle your standard-definition cinema needs.

It’s a nice system to look at, with smooth, glossy plastic and brushed metal aplenty. The surround speakers have a simple flat face and an aesthetically pleasing body. They’re designed to be easily wall-mountable with a central screw in the base and a large pad that could easily be attached with double-sided tape.

It has a small variety of inputs; this unit is designed as an all-in-one player rather than as a receiver for external devices (unlike the HTIS100, for example). Along with a headphone jack and Sony’s Digital Media Port (for connecting an iPod) the DAV-IS50 has composite, component and HDMI video ports; it also has analog RCA, optical and coaxial digital audio ports.

The brains of the beast are all hidden within the control unit. It has a slot-loading DVD player and it can handle DivX video as well as the standard range of digital audio decoding: Dolby Pro Logic II and DTS — all you’ll need for DVD audio. When outputting video through HDMI, content can be up-scaled to 1080p. While it won't compete with proper Blu-ray video, it’s still noticeably superior to a standard DVD player.

The speakers weigh a mere 70 grams each but they’re able to output clear, crisp treble. At times it can sound a little harsh but we only noticed this during music listening. If you’re intending to use the system primarily for watching movies it shouldn’t be an issue.

The mid-range is handled by the single subwoofer unit. Its tall, chambered design allows for a relatively small pressure driver to create room-filling noise. The downside of this is that mid-range often sounds boomy and expansive and a lot of intricate tonal detail is lost.

It’s a similar situation with bass: the jack-of-all-trades subwoofer unit doesn’t have a large enough speaker driver to properly extend low frequencies. As a result, bass is often uninspiring and lacks any kind of floor-shaking kick. This compromises the system’s value for watching movies, especially blockbusters that are bass- and explosion-heavy.

We appreciated the generous amount of cabling attached to each speaker, which should help in making room placement relatively painless. There’s also an optional S-AIR accessory to allow the rear speakers to function wirelessly — useful if you’re in a large room.