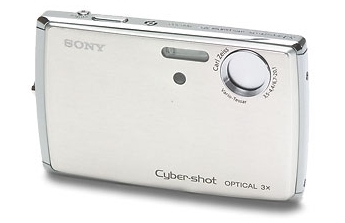 The Sony Cyber-shot DSC-T33 can take pleasing photos, but its most attractive aspects are its 2.5' LCD and ultrathin body.

Sony's 5.1 megapixel Cyber-shot DSCT33 is cleverly designed and compact. Its roughly the size of a deck of cards and looks like a fancy silver-plated cigarette box; the front and back are smooth, with no bulky bits sticking out. Its slimness makes it a joy to carry around, as it slides in and out of your shirt pocket nicely. It will stand on its own on a solid surface, for timed shots, say, but its thinness makes standing it on uneven surfaces a little tricky.

The camera's 2.5" LCD is great. We were glued to the screen during testing, and we ended up thinking far less of competing point-and-shoot models with comparatively tiny 1.5" or 1.8" displays. Though the LCD takes up much of the camera's back, Sony managed to place the various controls--including buttons for deletion, the general menu, the self-timer, and zoom--into a sensible layout. For example, as you're viewing a series of images on the LCD, the Delete button is slightly to the left of the arrow button that you use to cycle through the images, so it's a tiny move for your thumb--you don't need to change your hand position to zap undesirable shots on the fly.

Another small complaint: the microphone is housed right where your thumb would naturally sit when holding the camera. If you habitually record voice-overs with your mini-movies or still images, you'll need to move your thumb out of the way while doing so. We liked the large on-screen commands (Setup, Image Size, and so on). We also appreciated Sony's decision not to bury the more advanced settings in a labyrinthine menu system. It takes just a few clicks to access, for example, the white-balance settings, the exposure adjustments, and special effects like black-and-white or sepia tones.

In our image-quality tests, the DSCT33's photos looked a little mediocre. They appeared crisp, and strong on detail and in hands-on tests, digital zoom introduced little distortion to images. However, when we took some snaps indoors, the photos looked less vibrant than we expected. For example, the white balance seemed a little off. In one of our images, a white background had a greenish tinge.

The DSCT33 comes with a cradle, which you must use to download images from the camera and to recharge its lithium ion battery; if you're planning to process your photos on the road, you have to remember to bring the extra gear. A Memory Stick Duo card is also part of the DSCT33's package.

Sony's Picture Package PC software accompanies the DSCT33. It provides slide-show options, CD-R burning, and video CD burning along with the image-download tool, but that's about it.