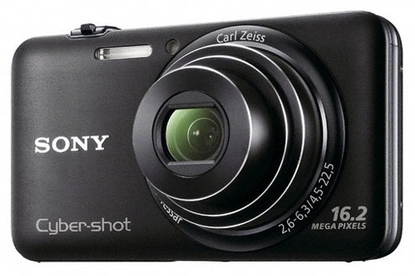 The Sony Cyber-shot DSC-WX7 is a slim compact digital camera that combines Sony's 16 megapixel Exmor-R sensor with a 5x Carl Zeiss lens. The sensor is generally good, which surprised us for a camera with high megapixel count and a tiny sensor, but the camera's lens has a disappointingly slow minimum aperture. It's a good snapshot camera, but unintuitive controls make quick manual operation difficult.

The Sony Cyber-shot DSC-WX7 is a compact 16-megapixel camera with a 5x optical zoom. It's capable of producing great images in good light and acceptable images in low light; its video mode is also impressive.

The Cyber-shot DSC-WX7 is significantly slimmer than the Panasonic LUMIX DMC-LX5 and the Canon PowerShot S95. It lacks any of the protrusions of these cameras, making it a little less friendly to hold but easier to fit in a pocket.

The rear of the camera is dominated by the 2.8in LCD screen, which has a 460k pixel resolution. It's clear and vibrant with great colour saturation, as we've come to expect from Sony's compact cameras. Next to the glossy screen you can find the DSC-WX7's buttons, including a scroll wheel that also acts as a five-way dial, and a mode switch to change between photos and sweep panoramas and video recording. The control layout isn't abysmal — with a little bit of practice you'll be able to navigate the menus and learn the location of options — but it does make manual operation more of a hassle than on a camera like the PowerShot S95.

In terms of features, the Sony Cyber-shot DSC-WX7 doesn't stand out from competing mid-level Panasonic and Canon cameras. It has the ability to take 2D and 3D sweep panoramas and stitch them together automatically — a nice novelty, but we don't think you'll use it all that often. The choice of 33 scene modes should keep snap-happy amateurs happy, and a 'Superior Auto' mode that brackets three photos and composites them into an optimum image is useful for capturing images in low light or high contrast.

In its automatic mode, the Cyber-shot DSC-WX7 is generally able to capture a good picture with accurate exposure, and it handles low light very well thanks to good high ISO performance.

Photos from the Cyber-shot DSC-WX7 are suitable for making 6x4in or A4 prints. However, when you look at photos at 100 per cent magnification on a computer screen or on an A3 or larger print, you can see the heavy-handed noise reduction that's applied by the DSC-WX7's image processor. Close up, edges look smudged and the entire image can tend to look grainy.

Images taken between the base ISO of 100 and up to ISO 400 have good levels of detail, largely due to the only minor level of noise reduction applied. From ISO 800 all the way to the maximum of ISO 3200, progressively more noise reduction is applied and more fine image detail is lost.

Video quality is among the best we've seen from a compact digital camera. The Sony Cyber-shot DSC-WX7 shoots video at 1080i — when viewing the recorded AVCHD video files on a Full HD monitor or TV, it's easy to see fine detail and interlacing isn't noticeable unless you're moving the camera around excessively or panning too fast.

Sony rates the Cyber-shot DSC-WX7's lithium-ion battery at 320 shots. From a fully charged battery, we managed to get an acceptable 280 shots.

One area that slightly baffled us was the slow start-up and shot-to-shot performance. The camera takes almost two seconds to start up, which is double the time it takes to switch on the Panasonic LUMIX DMC-LX5. Unless you're in the continuous shooting mode, which can capture 10 images in quick succession, shot-to-shot time is a disappointing 1.4 seconds.

The 5x Carl Zeiss lens is great at its widest zoom angle of 25mm and fastest f2.6 aperture. Images are sharp across the frame and there's a good level of detail, and the 5cm macro range makes it easy to capture close-ups. Zooming in to the camera's maximum zoom has a huge downside — the minimum aperture is f6.3, which is one of the slowest minimum apertures at full zoom we've seen on a compact camera. In comparison, the Ricoh CX5 has a minimum aperture of f5.6 at the extreme end of its larger 10x zoom. This slow minimum aperture means the camera has to bump up the ISO to compensate for less light hitting the sensor, making images grainy and soft.

The poor maximum zoom performance is our main concern with the Sony Cyber-shot DSC-WX7. If you generally shoot wide angle photographs, the DSC-WX7 is an excellent choice. The other pain point is the camera's excessive noise reduction processing, which robs detail and makes full-resolution viewing an ugly experience.

If you're an amateur photographer looking for a diminutive camera that takes generally high quality images, the Sony Cyber-shot DSC-WX7 should be one to consider.