12.1-megapixel compact camera with 3in LCD and 4x optical zoom 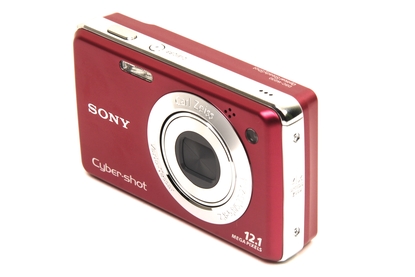 The Sony Cyber-shot DSC-W230 is an impressive compact camera that is especially suited to beginners. It takes good photos, comes with an enlarged LCD and has one of the best user interfaces we've seen. All in all, a solid effort.

The Sony Cyber-shot DSC-W230 is a 12.1-megapixel compact camera equipped with a 4x optical zoom lens. While image quality is acceptably decent, its main strengths lie in its enlarged 3in display and wide-angle lens. These help to distinguish the Cyber-shot DSC-W230 from other sub-$450 cameras on the market; never an easy feat. It’s also packed with consumer-friendly features (like face detection and smile shutter) and has an exceptional user-friendly interface. In other words, the Sony Cyber-shot DSC-W230 is a good all-rounder that’s worthy of your consideration.

It’s rare to find a Sony product that looks anything less than stylish, and the Cyber-shot DSC-W230 compact camera is thankfully no exception. It comes in a choice of three metallic finishes — red, silver and black. We tested the ‘red’ version, which is actually a shade closer to pink in our opinion. With dimensions of 95.2x21.8x56.5mm, the Sony Cyber-shot DSC-W230 isn't the smallest compact camera on the block, but this is made up for by its 4x optical zoom and 3in LCD.

We’ve always been fans of plus-sized displays. Other digital camera models to receive the ‘3 inch’ treatment include the Canon IXUS 990 IS, Panasonic LUMIX DMC-TZ7 and Sony Cyber-shot DSC-T700 — all of which are significantly more expensive than the DSC-W230 compact camera. If you enjoy previewing your photos in-camera (and who doesn’t?) the screen’s extra real-estate will really makes a difference. On the downside, it’s difficult to avoid contact with the display during operation, which swiftly results in a patchwork of ugly fingerprints.

The Sony Cyber-shot DSC-W230 also benefits from a user-friendly control scheme. It comes with a traditional mode dial that resides beside the LCD screen. This gives you instant access to ten popular camera modes, including twilight, high ISO, landscape and movie mode. Helpfully, an onscreen message appears when you move the dial back and forth, so you know exactly what each mode does. This should ensure beginners aren’t confounded by the inscrutable dial icons. After all, not everyone knows what 'P' or 'ISO' stands for.

For advanced options, the Cyber-shot DSC-W230 utilises a four-way directional pad and a simplistic menu interface that makes navigation a breeze. It uses a scrolling media crossbar similar to the Sony PSP and the Sony PlayStation 3. This leaves plenty of room on the screen for explanatory text. There aren’t many manual controls on offer, but this is to be expected from a point-and-shoot digital camera. Onboard features include face detection (with options to prioritise children’s faces), red eye reduction, a range of burst modes, adjustable ISO (up to ISO 3200), scene recognition and some digital effect filters. While the above feature set might sound a bit scant, it covers all the basic essentials. You also get a slideshow mode with a range of transitions and music tracks.

So far, the Sony Cyber-shot DSC-W230 has managed to excel in most areas, but we’ve left the most important test until last. Does the DSC-W230 compact camera cut it in the imaging stakes? In short, yes — but it won’t blow your socks off. While it's capable of taking colourful, distortion-free shots, the Cyber-shot DSC-W230 is let down by an underpowered flash that suffers from uneven illumination. Images were also a little soft, although this didn’t drastically affect the level of detail.

On the plus side, the 30mm wide angle lens is a boon for panoramic scenes and group shots. This adds an additional layer of freedom to your photographic aspirations, and also eliminates the need to constantly shuffle backwards. The Cyber-shot DSC-W230 also comes with an optical image stabiliser to ensure your photos remain blur-free.