The Sony Cyber-shot DSC-T900 has some interesting features, including a touch screen and a 4x zoom lens, but its image quality is only average. It's a very slim camera that's easy to carry to parties and clubs, and it's suitable for taking happy snaps that will eventually end up on a social media site instead of blown up on canvass.

The sliding lens cover and a lack of physical menu buttons differentiate the Sony Cyber-shot DSC-T900 from other compact digital cameras on the market — and it is definitely a compact camera. It's only 1.8cm thick, 10cm wide and 6.2cm tall, and it is very easy to take to parties and clubs.

Inside its slim body are a 12.1-megapixel CCD sensor (with a native 4:3 aspect ratio) and a 4x zoom lens. To begin taking photos, you must slide the front cover downward. This reveals the lens, focus assist lamp, flash, and a dual microphone array (which is used when the camera takes videos). The top of the camera has a power button, a play button, a ‘stills or video’ switch, and a zoom ring that surrounds the round shutter button. (The shutter button doesn't have a distinct two steps for focusing before taking the shot, which means you sometimes end up taking out-of-focus shots.) These are the only physical controls on the Sony Cyber-shot DSC-T900. Everything else — the menu system, shooting and picture settings — can be accessed by pressing the virtual buttons on its 3.5in LCD touch screen. 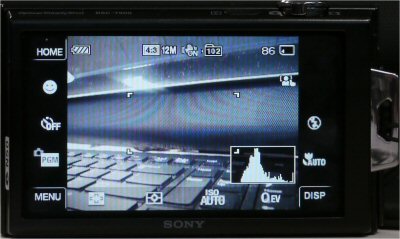 The 3.5in touch screen is easy to use. In this image you can see that the main menu features are on the left, while focus point, focus mode, ISO and exposure settings are at the bottom.

Icons for all of the camera’s functions can be easily pressed, unless you have particularly stubby fingers, and the interface responds quickly to touches. The screen means your camera’s display is going to look filthy most of the time. If you’re used to wiping it off with your fingers before snapping a pic, then you’ll need to double-check your settings to make sure you haven’t changed anything such as the focus point (the camera has nine of them you can choose from).

Despite have such a big screen, the Sony Cyber-shot DSC-T900's battery doesn't drain quickly. We were able to get more than the 220 shots claimed by the manufacturer (with minimal zooming and the flash disabled). In bright sunlight, the screen can be difficult to view, but only if the sun is shining directly on it. In most cases while outdoors on a sunny day you will still be able to see what you are shooting and read the menu.

You can use the Cyber-shot DSC-T900 digital camera in all sorts of situations: at a park, at a party, at night, while travelling. It handles all situations adequately, but none of them exceptionally. It has an intelligent automatic mode that can adjust all of the camera's settings, which is useful if you just want to use the camera without learning all of its features. It also has a program auto mode and 11 scene modes. You get face detection and a smile shutter (you can adjust the sensitivity of the smile shutter if you find that it keeps taking pictures of straight faces).

Photos taken with the Cyber-shot DSC-T900 came out looking grainy and weren't sharp enough when viewed at their maximum size. You won't want to print out images larger than A4 as they will look soft and have a muddy quality. At smaller sizes, though, for use on social-networking sites or printing at 4x6in, images will look fine, with vibrant colours, accurate tones and smooth rendering.

Built-in image stabilisation works well; it lets you take relatively clear photos in dim lighting. We were able to take photos with a shutter speed as slow as 1/8th of a second while holding the camera. Nevertheless, if you will be shooting in low light we recommend resting the camera on a table or using a tripod. In low light, the camera will boost the ISO automatically to 800. This will introduce more grain than usual. There isn't an ISO limiting function, so it's best to shoot in program mode (this lets you control the ISO speed yourself). Keep it at 400 or lower for best results.

A setting called dynamic range optimiser, or 'DRO', is present in the menu. It can be used to lighten dark areas of images. This works but it overexposes already-light parts of an image, so it's best to leave it disabled.

One of the key features of the DSC-T900 is its 4x zoom lens. It's not the first time we've seen a 4x zoom lens in a compact camera — the near identical Sony DSC-T90 has one, too, as does the Panasonic Lumix DMC-FS7 — but unlike the lens in the Panasonic, the lens in the DSC-T900 doesn't extend from the body. It has a focal range from 35-140mm (35mm equivalent), which is a slightly longer reach than we're used to from a compact camera. 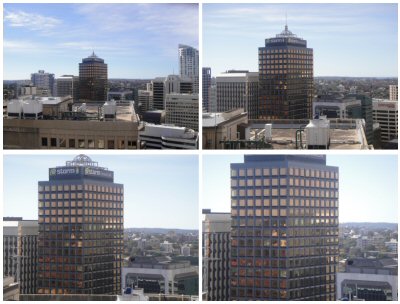 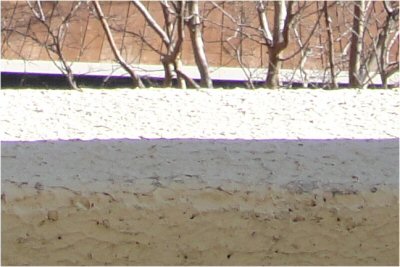 You can see the chromatic aberration where the shaded area meets the white area. It's manifested as purple fringing.

The speed of the camera is adequate; there is a slight delay between shots while data is written to the Memory Stick (the camera uses Memory Stick Pro Duo instead of an SD card) and it takes approximately 1.5sec before you can start taking pictures when you switch it on.

Despite some problems with its image quality, we like the idea of the touch screen and the relatively long reach of the tiny 4x zoom lens. But anytime you cram a 4x zoom lens into a body that can maintain a 1.8cm thickness while it's zoomed all the way, compromises in image quality have to be made and the Cyber-shot DSC-T900 makes a few. Unless your intention is to blow up images or to crop them closely, the camera's shortcomings won't be too evident. We think you should consider this camera if you want something that's stylish, easy to use and very small.