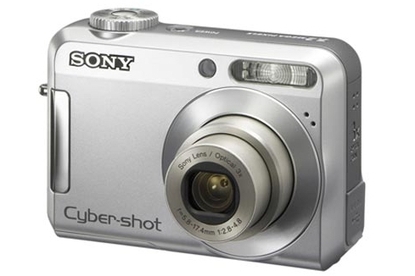 An uninspiring compact camera, Sony's Cyber-shot DSC-S650 has numerous issues with regards to image quality and general operation that mean there are better purchases elsewhere.

Sony has been somewhat hit and miss with their compact cameras recently. The small, stylish models such as the DSC-W50, have been excellent all around units. However, their latest effort - the Cyber-Shot DSC-S650 - leaves quite a bit to be desired. It has image quality issues such as high chromatic aberration and poor colour response, and its sporadically malfunctioning auto focus resulted in blurred and unusable photographs. The interface was also quite sluggish and unintuitive.

Our big problem with the unit was the auto focus. In our tests, we shoot using a standardised setup consisting of a tripod with two tungsten lights and a set of test charts and subject material. On at least half of our shots of the contrast chart, the camera blurred the picture horribly, resulting in a ruined shot. This also occurred, at times, when shooting other targets too. In many cases, we would take a perfectly clear picture, adjust the exposure by one measure, and then take the same picture again and the second would be out of focus. There were plenty of situations where this wasn't a problem, but the focusing was definitely hit and miss.

Aside from the auto focus issue, it performed moderately well in our image quality tests. We ran our test pictures through our Imatest software, in addition to subjective tests, to determine what sort of quality the S650 produced.

Its score of 1443 for sharpness is a good result for a 7.2 megapixel sensor, and the shots that weren't blurred were reasonably impressive. There was a little softness and fringing around some edges, but this is fairly typical of mid-level 7 megapixel consumer cameras, and won't be an issue at small to medium magnifications.

However, the S650 did exhibit higher than normal chromatic aberration, with Imatest giving it a score of 0.129% in this area. We could clearly see it in our pictures, with a noticeable lack of clarity towards the exterior and visible haloing at areas of high contrast.

Colour response was the area this camera really fell down, achieving a score of 14.1. This result is much higher than the results of competing models, most of which score around half as high. Every shade exhibited noticeable error, with yellows and greens being the least accurate. At this level, the poor colour reproduction was noticeable in our test shots and will be a big negative factor for most people.

Fortunately, the S650 redeemed itself a little in our noise test, where it achieved a great result of 0.62% at ISO 100. Most units achieve scores around 0.8% to 0.9% so this is an excellent performance and our shots reflected it, with no visible noise whatsoever. As expected, when we ramped up the sensitivity, the noise level came along for the ride and by the time we hit ISO 400 our shots were speckled and quite fuzzy. We wouldn't recommend using anything above ISO 200 with this model, unless you're intending the final product to be extremely small.

Our other main complaint with the S650 is its controls. It uses the standard Sony camera slider bar menu which is alright, but nothing outstanding. However, throw in sluggish response times and controls that require three or four presses to activate, and it quickly becomes tiresome. With some extremely firm presses on the keys, it operates properly most of the time but even then, many of these problems still persist and the overall navigation experience was quite irritating.

As this is a fairly basic compact camera, the features list is somewhat bare, but most of what you'd expect is here. We were disappointed, but not surprised, to find manual white balance has been omitted; you'll have to use the presets or automatic modes here. However ISO sensitivities extend up to 1000 and there are a variety of colour modes including sepia, rich, natural and black and white. The burst mode is rather poor, operating at a sluggish 1.2 frames per second.

This slow speed was also apparent in the rest of the camera's operation. Its 1.9 second shot-to-shot time and 2.6 second power up time were serviceable if a little behind other models, however the S650's shutter lag was extremely disappointing, clocking in at .2 of a second. That's more than double what we expected and will put a serious dampener on those trying to capture a quick snap.

Aesthetically the S650 is fairly plain. It has the same matte silver plastic chassis that is seen on the majority of digital cameras these days and it looks decent but uninspiring.