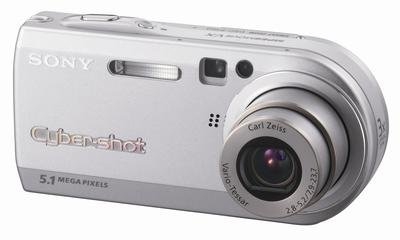 A very complete camera in a small package.

For a small camera it has many neat features. As you navigate through the ISO settings (which range from Auto, 100, 200 and 400), the image on the LCD changes according to the ISO setting. For example, if you are indoors and move up from 100 speed film to 400 speed film, the image gets brighter as the CCD sensitivity increases. This is quite helpful in gauging, by eye, what is the best speed to use.

Similar changes are instantly represented on the 1.8" TFT LCD screen when selecting a picture effect. If you are in standard mode and choose either B&W or sepia, the screen changes accordingly. The same applies when selecting white balance or the exposure level.

Although exposure can be set to automatic, manual adjustment is also possible. The compensation can be set in 1/3EV steps and range from +2EV to -2EV. When scaling down from +2EV to -2EV, the image on the LCD screen goes from very bright to very dark, providing a real-life representation of how the image will look when captured. Although this is only applicable in Scene, Program and Movie modes, it is a useful tool.

The P100 allows aperture and shutter speeds to be set in manual mode. The aperture ranges from f2.8 to f10, while the shutter speed ranges from 30 seconds to 1/1000 of a second. The preset scenes include: twilight, twilight portrait, landscape, soft snap (skin colours), snow, beach, fireworks, candle and high-speed shutter mode. The latter mode is used for action shots in bright places. And brightness is essential here. Moving targets in low-lit areas came out far too dark to be of any practical use. Even shots taken in the ideal bright setting still appeared out of focus.

Once the image is taken, images can be rotated on screen. Images can be played back as a slide show that ranges from intervals of 3, 5, 10, 30 seconds right up to one minute. This is very handy for playing it back on the TV set via the camera's AV-out socket.

Although it's great for distant shots and portraits, the camera does not do so well with macro shots. Ideally you need to be about 30cm from an image to get the best definition. Too close and you lose focus.

Movies are saved as MPEG. When using Memory Stick PRO, the camera saves MPEG movies in Fine mode with 640 x 480 at 30fps. When using standard Memory Stick, it saves only in Standard mode at 640 x 480 and at 16.6fps. There is also the Video Mail option--160 x 112 at 8.3fps--which is adequate for its intended purpose of email but the video is too jumpy and low in quality to use for anything else.

Sony has employed a high-end feature on many of its models--an AF illuminator. In the P100, the AF illuminator is a red fill-light that shines on subjects when light levels are low, typically indoors or at night. This allows the camera to see subjects better, and ensure that shots taken are in focus. The illuminator shines for only a few seconds and automatically switches off when focus is locked-in. The only downside is that people, especially young kids, might find that a red light in the face is a little distracting. The illuminator can be switched off, but this increases the chance of taking out-of-focus shots unless the focus distance is preset in the menu setup.

Getting caught out with a dead battery is near impossible as the camera has a battery timer that counts down from 200 minutes. This means you can see how long is left on the lithium battery before recharging.

Deleting images could be speedier. Only one shot at a time can be deleted unless the card is reformatted via the Set Up function. The camera is PictBridge compatible, enabling direct printing from the camera to a PictBridge-compatible printer.

Sony's Cyber-shot DSCP100 packs a lot for a small camera. It has a sleek look and features aplenty to keep any camera buyer satisfied.