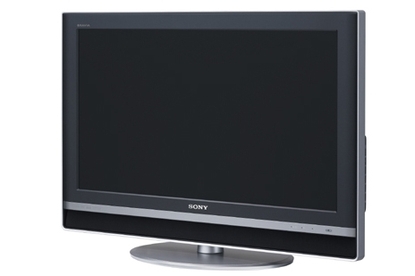 If you watch a lot of DVD movies give this display a miss, but if you’re more of a sports buff and intend to kick back with the footy on a high definition set top box then this could be a consideration.

Sony's V series is the premiere wing of their new Bravia LCD range. Considering how impressed we were with the S series model we looked at last year, we were salivating at the notion of getting a look at their premium model. With the Sharp Aquos and the Hitachi 8800 having passed through here recently we have been spoiled for displays of late, and were hoping the Bravia would continue that trend.

Unfortunately we were disappointed. The V40A10, whilst performing above average in many of our tests, failed to truly impress us. Sporting a massive price tag, it simply doesn't compete with the high end models mentioned above.

The biggest problem with the unit was its rendering of standard definition content. Throughout our Displaymate and high definition tests the Bravia looked quite reasonable, but when running standard definition 480p content we encountered a horrible amount of noise. Regardless of the subject being presented, objects were often highly pixelated and there was a complete lack of definition. Watching Kill Bill for example, the opening scene was so poorly rendered that the streams of blood and Uma Thurman's skin tones were often indistinguishable. We couldn't imagine watching DVDs on this TV on a regular basis.

When running high definition content however, the screen made a significant jump in quality. We hooked up our Xbox 360 and fired through a few rounds of Ghost Recon and were much more impressed. There was still a little noise around bright colours, particularly reds and blues, but the picture was for the most part clear and crisp.

It is a shame the image scaled so badly, because this display has several characteristics that would otherwise push it into the realms of four stars or more. First and foremost it has fantastic blacks. LCD displays cannot render true black, it is an innate limitation within the design, but the Bravia's blacks were dark and rich, and didn't once turn to dark grey as we have seen on so many other screens. Similarly, the contrast ratio was excellent, with solid graduation between colours. Occasionally the jump from dark areas to black areas was a little sudden, but for the most part we couldn't have been happier with this element of the display.

Displaymate revealed a great representation of the colour spectrum, with no major inaccuracies to speak of. Whites may actually be the exception here, not projecting the pure, bright hue we are used to seeing, but it wasn't a big problem. It did also reveal a small lack of uniformity within the backlighting, which presents itself as a small gray shadow, running along the very bottom and in the corners of the screen.

The unit is designed very nicely. It has a black bezel about two inches wide running all the way around and the controls are situated in a single strip down the right hand side. A single speaker is built into the base of the unit. Normally televisions don't have the best sound quality on their own and thus we were extremely pleased to discover the Bravia's speakers were both clear and powerful. Most people who purchase a flat panel display will already have a home theatre kit, but for some the included speaker quality may be important.

We were equally as impressed with the range of inputs on offer. The Bravia supports everything you could ever need, even if you don't have a home theatre reciever. It has two component ports, HDMI connectivity, D-sub for your PC connections as well as S-video and RCA ports. The full spectrum of connectivity is covered which is always nice to see.