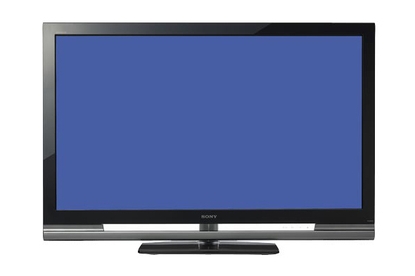 Sony's KDL52W4000 is an exemplary Full HD panel. It's surprisingly slim, with great contrast and brightness and a price tag that is actually quite reasonable for the quality offered. It doesn't handle lower resolution content particularly well, but it's perfectly suited to high-definition playback and produces vibrant and rich images.

The W series sits in the middle of Sony's range — above the utilitarian V series, but below the X and XBR series. The W series uses a Full HD 1080p panel and has many of the features of more expensive televisions, including 24p cinema mode. However, Sony has not included its 'MotionFlow' 100Hz technology — presumably to keep a definite demarcation between the W series and the company's pricier panels.

We tested the television with a wide range of Blu-ray and HD-DVD movies and were impressed with what we saw. Colours are a strong point of the KDL52W4000 — intense and vivid without being overblown and destroying detail. Black levels are clearly defined, although they still aren't as incredible as we've seen on Pioneer's KURO plasmas. Contrast wasn't perfect out of the box but this was easily remedied, with the end result being a well balanced picture with plenty of dynamic range.

The end result is that high-definition content looks almost flawless. Detail is reproduced to fantastic levels, and there is no evidence of ghosting or uneven colour distribution. Another pleasant surprise was the near-perfect viewing angles — at everything but the most extreme side angles there was no noticeable loss in contrast. This is great news for large rooms that have multiple viewing areas.

Oddly enough for a new model, the KDL52W4000 doesn't support a 100Hz picture mode — the technology which effectively doubles the amount of frames shown per second. This means that the W series panels may not be the best choice if you enjoy watching fast motion content like sports or playing video games.

Sony's panel is definitely aimed at the high-definition consumer who owns either a Blu-ray drive, HD-DVD disc player or another method of playing 1080p or 720p content. It handles these picture modes incredibly well, with no scaling artefacts visible when viewing 720p content.

In standard-definition picture modes it doesn't fare so admirably. Watching a DVD without any up-scaling enabled on our Samsung BD-P1000 resulted in a large amount of blurring and constant expansion artefacts noticeable.

Our standard definition test DVD of The Matrix generally looked poor, but this is to be expected when trying to view such comparatively low quality content on a dedicated Full HD screen. Thankfully, most new DVD players will have some ability to up-scale content; while this isn't the perfect solution, it makes standard-definition DVDs far more pleasing to the eye.

The W series has a simple bezel, with designers opting for traditional sharp angles and dark tones. The one design standout is the translucent panel that runs across the lower edge of the screen and houses the television's three main activity lights.

Plenty of connectivity options are offered, including three HDMI ports. In addition, there are two component, two S-Video and three composite inputs. Odds are, whatever home theatre technology you possess, the KDL52W4000 will be able to handle it.

Just like Sony's older Bravia KDL-52X3100, the KDL52W4000 has an extensive on-screen menu, with plenty of options for customising picture settings. This is perfect for panels that are set up in sub-optimal conditions, especially in conjunction with the television's dynamic contrast system which changes contrast and brightness levels depending on ambient light levels.

For a model that isn't top of the line, it provides a great quality picture. There's no 100Hz support and the panel doesn't look too great with standard-definition content, but apart from that the KDL52W4000 is a great all-rounder.