The Sony BRAVIA HX925 is Sony's top TV, and as you'd expect it's crammed full of class-leading features. We can't fault its picture quality when displaying 1080p high definition video, and it also does a reasonably good job of upscaling DVD content. The internal TV tuner is OK but external options offer better quality. We think its design is great, but the stand is slightly unsteady and the screen is painfully glossy.

The Sony BRAVIA KDL-55HX925 is, surprisingly, the smallest model in the company’s top range of LED-backlit LCD televisions. Despite being a 55in panel it’s dwarfed by the gargantuan 65in KDL-65HX925, which hasn’t been released yet but will command a price tag even higher than the 55in’s $4499.

The BRAVIA KDL-55HX925 has every feature Sony has built into its 2011 range of LED TVs, so gadget geeks will be spoilt, but the HX925’s glossy design — attractive and stylish though it is — means it is not appropriate for watching in a bright room.

Let’s get this out of the way early — the Sony BRAVIA HX925 has a very glossy screen. Sony’s product page for the HX925 talks up its high quality Corning Gorilla Glass screen finish and the supposedly reflection-reducing OptiContrast panel, but if the HX925 is an example of a screen with low reflectivity we’d hate to see what Sony considers a highly reflective one — a mirror, we’re guessing.

If you’re watching in a room that has no light sources in front of the screen, it’s not a problem. If you’re in a room that has ceiling lighting that’s not especially bright, or if there’s lighting behind the screen, it’s not a problem. But if you’re in a room lit by daylight, even diffused through curtains, you’ll be able to see your own reflection in the HX925’s panel. It is simply inappropriate if you’re going to be using it in anything other than a dim or dark room — or if you don’t care about reflections disrupting your viewing.

Setting up the Sony BRAVIA KDL-55HX925 is a painless process. The stand only connects to the television with a few small hex bolts, and we thought it was a bit flimsy — if you swing the HX925 from side to side through its swivelling range, the screen itself wobbles slightly. If you’ve got the option we’d recommend wall mounting as a permanent solution. We had the TV connected to a Apple MacBook Pro and Sony BDP-S480 Blu-ray player over HDMI for our testing, as well as a TiVo HD PVR to compare digital TV quality. 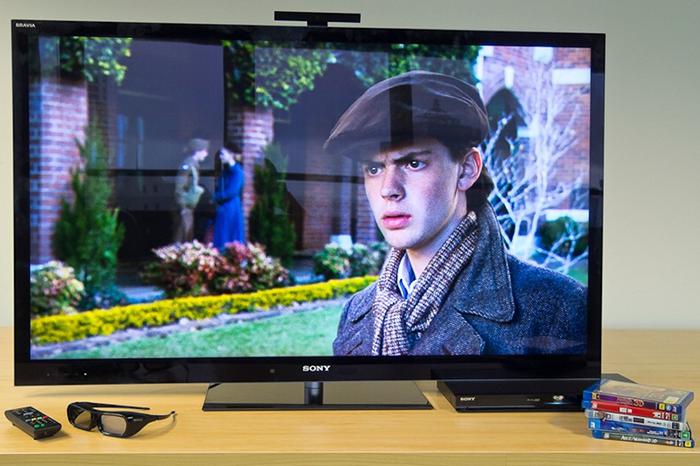 The BRAVIA HX925 has a very glossy screen. You can see the sky and balcony reflected here — look in the top half of the screen for three black bars — even while watching a video at maximum brightness.

When the BRAVIA KDL-55HX925 is powered on for the first time, you’re prompted to run through a digital TV channel scan and to set up the television’s networking features. As befits the most expensive and feature-packed model in Sony’s line-up, the HX925 has inbuilt Wi-Fi and integrated Ethernet networking, so you can opt for whichever is more convenient. We chose Wi-Fi to cut out having to connect another cable to the back of the TV — it’s 802.11n so there are no problems with streaming high quality video through Sony Internet TV or downloading content through the TV’s BRAVIA Internet Video service.