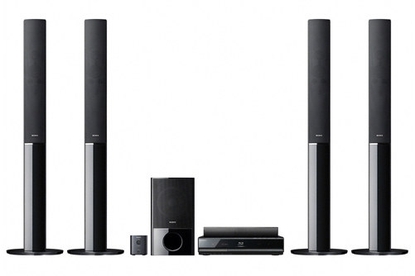 Sony's BDV-E800W is a solid pre-built home theatre. It's not going to blow you away with its sound quality or construction, but what you get for your money is a competent system that handles the high-definition audio tracks of Blu-ray movies well.

Sony's BDV-E800W is a decent home theatre system, with reasonable sound quality and an extensive feature set. Its audio isn't as good as more expensive systems and ones with proper speaker cabinets, but as a simple-to-use accompaniment to a modern flat panel television it's a good choice.

The Sony BDV-E800W is a pre-built home theatre system incorporating four floor-standing speakers, a thin centre speaker and a squat subwoofer. The receiver has a built-in Blu-ray disc player along with a range of ports for connecting your high-definition LCD or plasma television. It's a stylish system overall, with the receiver standing out from the crowd with the same mirror-finish front we saw on the Sony BDP-S560 Blu-ray player. The plastic construction of the speakers makes them feel a little flimsier and lighter than we would like, however.

Setting up the system is relatively easy: clip the floor-standing speakers together and attach their bases, make all the necessary speaker wire connections, and finally connect your television. (We tested using the receiver's HDMI output and a Panasonic TH-P54Z1A plasma.) Placing the various components of the system around even a large room is easy thanks to long cables and the S-AIR wireless rear speaker option. Once the Sony BDV-E800W is up and running, you're presented with an on-screen interface not unlike that of the PlayStation 3 or any recent Sony television. The 'XrossMediaBar' interface is good looking and supremely easy to navigate. Starting the playback of a Blu-ray disc only took a matter of seconds once it had loaded.

Picture quality was as good as any other player on the market, with great picture quality from the Full HD 1080p output of Blu-ray discs. The Sony BDV-E800W also handles 480p and 576p DVDs well, upscaling video to 1080p with reasonable clarity and no significant artefacting that we could see.

The system's sound quality is well suited to blockbuster movies and limited music listening — the combination of powerful subwoofer and thin speakers means there's a heavy focus on mid-bass and treble, with mid-range frequencies feeling recessed and often lacking.

Treble is generally clean and clear, providing a crisp edge to dialogue and cinematic audio. The floor-standing speakers can be pushed to uncomfortably loud volumes before treble distortion creeps in. Bass is acceptably handled by the subwoofer driver — it doesn't extend particularly low into the frequency range but it does provide a useful addition to movie audio.

Mid-range is not nearly as pronounced; the small speaker size of the floor-standers means they can't push a lot of air to create lower notes. The subwoofer holds up lower mid-range notes acceptably, but the system occasionally feels lacking especially when listening to acoustic music. This problem isn't unique to the Sony BDV-E800W; most pre-built "home theatre in a box" systems have the same flaw.

The Sony BDV-E800W provides support for Dolby TrueHD and DTS-HD high-definition audio codecs — these are the ones most commonly used on Blu-ray movie discs. While the merit of decoding these high quality streams and outputting them to mediocre speakers is questionable, the support is nonetheless appreciated.

Sony's BDV-E800W is a competent home theatre system. It provides solid competition for similarly priced systems from competitors such as Panasonic and LG.