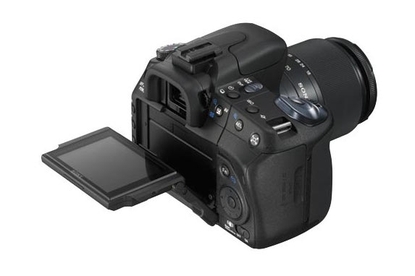 Sony's Alpha A350 is another great SLR offering a combination of incredibly high resolution pictures, a robust list of features and a simple easy interface.

Sony has really been ramping up its efforts in the SLR space recently. Launching with a single model in late 2006 the company has since expanded its line-up to include multiple tiers and occupying the mid-range with the latest unit, the Alpha A350. Sporting an ultra-high resolution 14.2-megapixel sensor and a lot of the bells and whistles present on the more expensive Alpha A700, it also packs in one thing previous Sony SLRs have lacked; live view.

Using the system originally implemented by Olympus (which Olympus has since moved away from), the A350's live view isn't done using the default sensor, rather, a second sensor is housed in the viewfinder area and a mirror inside deflects light towards it when the LCD is active. This circumvents the issue of slow autofocus which is a problem plaguing other live view models, but it does add a certain amount of bulk to the unit.

In general we found the live view operated brilliantly. The alternative sensor arrangement means you can see on screen which points are being focused on and the process is much quicker than on any competing models. While the display isn't of as high a quality as that found on the Alpha A700 it is adequate for lining up shots and this should prove a drawcard for compact camera users looking to make the SLR jump. Users should note, however, that the live view doesn't provide the same coverage as the viewfinder. You'll see about 90 per cent of the total frame, which is fine for most snaps but may be a problem if precise accuracy is required.

Another feature that enhances live view is the hinged screen. While it cannot be twisted side to side or flipped complete around it can be angled upwards or downwards, allowing users to frame shots holding the camera above their head or down at their waist which really allows for a little extra creativity.

As you'd expect from the gargantuan 14.2-megapixel sensor, the A350 captures great snaps. Resolution was excellent, with the crisp detail typical of mid-range SLRs. We tested using the stock 18-70mm kit lens and while it is adequate it does cause some noticeable chromatic aberration in the form of purple haloing and flaring as well as some minor softness towards the edges of the frame. To do this camera justice we'd recommend investing in a better lens.

Colour accuracy was impressive with spot on skin tones and only very minor inaccuracies across some of the primary colours. Meanwhile exposure was well handled; bright areas were kept under control and there were good levels of detail in dark patches. This is helped by the included Dynamic Range optimiser which is a carry over from the earlier two new models.

Image noise was kept under control at most sensitivities. We did see some creeping in at ISO 800, but it was very fine white noise and was only visible at large magnifications. At 1600 and 3200 it became a little more prominent and colourful but we'd still be happy using the shots in most situations. There are a variety of noise reduction technologies included, which do a good job of keeping grain to a minimum without impacting the picture negatively.

Speed wise the A350 is competitive with other D-SLRs. There is no noticeable shutter lag or delay between shots, and power-up time is next to nothing. The burst mode operates at roughly three frames per second which is adequate but nothing special. This slows down to about two frames per second if live view is active.

Aside from live view the feature set is fairly standard. The usual manual shooting modes are present along with a variety of scene options. White balance can be tweaked using the presets, custom or full manual modes and you can also adjust the individual presets by colour temperature. The Super Steadyshot stabilisation mode works well to eliminate handshake issues; however, the included dust reduction function isn't quite as effective as those on some competing models.

As with the earlier Alpha A200, one of the A350's key strengths is its ease of use. Sony has set a benchmark, producing the simplest, cleanest and most intuitive interfaces on any SLR. This makes them extremely appealing to novice users who are happy with their happy snap models but unsure with anything more fancy. The control layout is clear and well labelled and what few menus there are, are simple and uncluttered.

In terms of design this unit is a little larger than normal thanks to the second live view sensor, but aside from that it is well constructed. It sits nicely in the hands with the chunky grip feeling particularly good. It isn't quite as sturdy as some competitors, but as long as you don't go dropping it constantly the body should endure just fine.