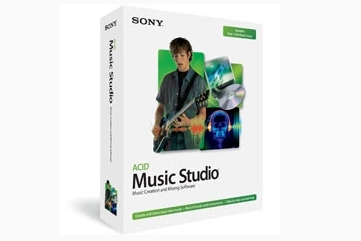 Sony's ACID Music Studio is another great addition to the ACID software family, allowing users to create loops, record live instruments, master tracks and burn compositions. ACID users may range from novice to the professional audio producer, which gives some idea of the versatility of this software. With an easy to use interface, built in tutorials, an enormous loop archive and a complete set of production tools, Sony's ACID Music Studio is the definitive place to start your career in music production.

There have been many iterations of the ACID Music software, and the latest, ACID Music Studio provides the same functionality of previous versions as well as some handy new features. Some of the best features in this version include VSTi support, which allows users to run virtual instrument plugins, resulting in a variety of real-time effects. Another addition found in this version is the Show Me How tutorials. Show Me How tutorials provide interactive tutorials on the basic functionality of the program. Each of the interactive tutorials is short and to the point, enabling anyone to learn the foundations of loop based music within minutes.

The interface of Music Studio is presented in an easy to understand and helpful manner. On first look, users will notice the major elements of the program, which includes the timeline, trackview, mixer, explorer window, video preview window and track properties. These windows provide the fundamental controls for editing a track, and after a brief accustoming through the Show Me How interface tutorial, we were quickly on my way to producing some smooth sounding beats.

At first, we experimented with the included loops and samples package, found on the included Sound Series CD. These samples make up an archive of 1700 sounds providing all the drum beats, synths, instruments and other noises to keep most users happy. Once users become more comfortable with productions, there are an infinite amount of samples which can be taken from any other sound source. ACID Music Studio includes recording capabilities, allowing anyone to record segments of their favorite MP3's, Audio CDs, Vinyl or even live instruments. We soon became addicted to searching for the best beats to sample, digging through tons of records and CDs. An interesting side note is that after creating our own music, we started to listen to music we had heard previously in a totally different manner, listening for effects and production techniques and then trying to emulate the same sounds myself.

Live instrumentalists will also find this program attractive, turning any musician into a one-man band through multi-track recordings. By plugging in from your amplifier, or recording your instrument through a microphone, users can compose tracks and create digital additions in their songs. A built in metronome as well as the ability to play over a looping pre-recorded track ensures that timing can be kept, and if a take doesn't go to plan, users can always erase the recording or chop out the mistakes.

Another Music Studio feature is the ability to lay down a video file, or image and create a score using the scoring tools. Although not as precise and feature filled as Sony's Vegas Movie Studio, Music Studio users will be able to create a music clip with out much effort. Tools found in the tempo controls ensure that the video remains synchronized with the audio track and there are also some basic timeline cropping, shifting and trimming tools available.

Once you have created your tracks, users can then render tracks into a variety of formats or burn their project to CD from within the Music Studio package. Users who register their copy of ACID will be provided with an ACIDplanet.com account, giving users the ability to distribute their music through the ACIDplanet website to anyone online.

Sony ACID Music Studio is the audio production and loop based production package to have. It is an extremely versatile product, teaching users to create tracks from scratch as well as master their productions and finally distribute their creations. We were impressed with the ease of use and broad functionality, proving to be helpful for anyone looking to tap into their musical talent.