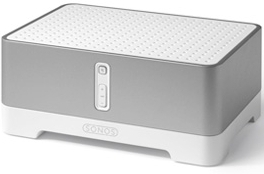 Expensive for a streaming audio system, but has unique features and an elegant design lacking in other systems.

By no means the only product to stream digital music around your home, the Sonos Digital Music System sets itself apart from the competition with a 50W-per-channel amplifier and the ability to play music from removable storage devices. All you need to add is a pair of high-quality speakers.

Including the amp makes sense if you buy into how Sonos envisions your use of the system. Via the product's analog outputs, you could just hook a single player up to a stereo (and a subwoofer) in your living room or den. But Sonos would like you to place multiple players - up to 32 of them - all over your house. They connect to each other over ethernet or over a proprietary 802.11-based "mesh" network: each player acts as both a sender and a receiver, with no need for a central hub or router.

The system can play digital music from up to 16 sources - computers or network drives - and every player can have its own line-in source that is broadcast over the network. You can queue different music selections on each player, or put all of them into a "party zone" that plays the music in perfect synchronisation. Or you can create multiple such zones in your house.

Two ZonePlayers connected flawlessly, despite being separated by about 15 metres and three walls. The system falls short of wireless perfection, however, because at least one player must be linked to your network via an ethernet cable.

The Sonos system plays Internet radio, as well: there are approximately 200 stations (including Australian stations) pre-programmed on the system, and adding more was a cinch, especially via the PC-based control software. Each ZonePlayer also has stereo line-in jacks for receiving analog input - say, from a CD player, a radio, an iPod or a TV - and broadcasting it around the house.

Controlling all these options could be a nightmarish task, but Sonos makes it simple. The Sonos Controller wireless remote includes a 3.5in colour LCD; it also has a touch-sensitive jog wheel and hierarchical menus, both of which are quite similar to those on the Apple iPod. A few shortcuts make it even easier: you press the Zones button to select a single player or to link up several. Then you press the Music button to choose from digital files, Internet radio presets, or line-in sources.

Depending on how you use it, battery life for the controller is good for three to four days and the battery charges up in a reasonable two hours via the included AC adapter, or charging cradle.

The Sonos system is amazingly polished for a debutante, but it still has flaws. The controller scans the network and associates with the nearest player, but it can be a little sluggish when switching from one player to the next. The amp is powerful, and music sounded rich going through a set of Klipsch RB-15 speakers, though a bit heavy on the bass and weak in treble, giving vocals a slightly distant sound.

We'd also like a USB 2.0 port on the player; network drives are great for some situations, but USB-connected disks are cheaper and far more common. However, this was not enough to change our very favourable impression of the product and we would happily put ZonePlayers and speakers in every room of PC World headquarters, if we could afford it.