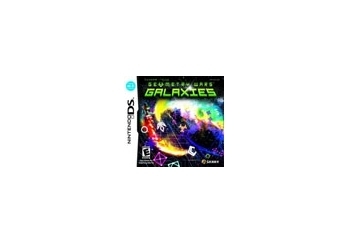 If Geometry Wars: Galaxies isn't flying off store shelves, a lot of DS owners have missed the boat.

Welcome to your next videogame high. This is not hyperbole, believe us; you will touch the stylus to the screen and not be able to put it away. You'll play on the bus or train despite the bumping and jostling; you will play on your lunch break and forget to eat; you will play at every possible free moment, because Geometry Wars: Galaxies for DS is more awesome than you ever imagined it could be.

Like the Wii version, Galaxies for the DS takes the fast-paced duel-analogue shooter from Xbox Live Arcade to an interstellar scale by introducing different solar systems and planets to conquer. There are other important differences, like the bot friend who tags along and can learn a number of behaviours that you unlock with enemy drops known as "Geoms". These enemy drops also unlock levels and function as score multipliers up to a 150 times multiplier. Between the tactics needed to collect Geoms and the strategy in deciding which of your droid's behaviours you'd like to level up first, Galaxies adds at least a couple layers of exciting complexity.

Anyone worried about the controls can relax. When you first see that you'll be aiming via the touch screen and steering with the D-pad while looking at the top screen, it probably sounds daunting or stupid. Luckily, once you play a couple of the training levels, you'll be a pro.

The neon geometry shapes look great zooming around your DS screen until there are too many of them and the slow down strikes, but it's recommended that you take this as we did when were kids: as expressive, cinematic slo-mo, and just enjoy the game. It's too fun to let that bit of technicality get in the way of you and your friends' fun when they join you for multiplayer, which includes a mode where one player drops enemy ships on the other. If Geometry Wars: Galaxies isn't flying off store shelves, a lot of DS owners have missed the boat.