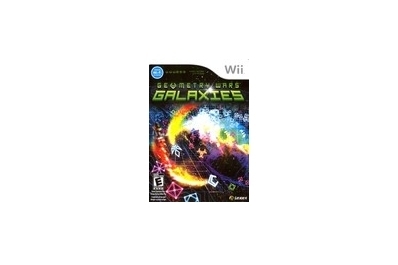 It's still a lot of fun and very addictive, but it would've been better off on the Virtual Console instead.

In case you're one of nine people who haven't heard of the simple yet awesomely addictive Geometry Wars, here's a quick primer: you command a ship that flies around an enclosed star-field.

You can zip around and shoot in a 360-degree sweep, which is good because as the action ramps up, about a bajillion enemies appear on-screen. They don't shoot projectiles but each has their own specific movement patterns and behaviours. Some will chase after you while others just move mindlessly.

The Wii version of Geometry Wars is a great port and the developers overcame the one potential hurdle -- the controls. You move with the Nunchuk's analogue stick, activate your bombs with the C button and aim your shots with the Wii Remote. It works surprisingly well, though some hardcore players will probably find it less accurate than a dual-analogue setup. The simple graphics also translate well to the Wii and the game retains the awesomely psychotropic visuals.

Unfortunately, while the various modes, including multiplayer co-op, are fun, the little twists, such as travelling around a solar system and powering up a drone helper, don't really do much to change the core gameplay. They're interesting additions but really, you're still in your ship blowing the crap out of everything that moves. We sort of wish they had just released the original on the Virtual Console and charged a couple of bucks instead of trotting out a retail package, but this is still a sweet way for Wii owners to experience the addictive Geometry Wars action.