These cheap Sennheiser headphones may be gaudy, but they're sturdy and sound decent 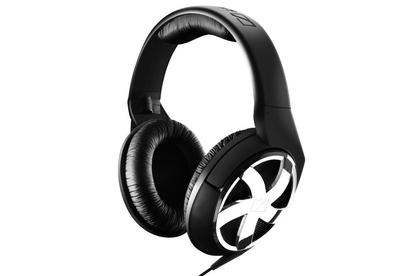 Sennheiser's HD 438 is a pair of sturdily built PC gaming headphones with good bass extension — useful for action gaming and some types of music. If you can get past the awkward headband and ugly ear-cups, these headphones are a good buy.

Sennheiser's HD 438 headphones are designed for listening to music and PC gaming. They're reasonably priced and sturdily built. Though they don't offer spectacular sound quality, non-audiophiles should be relatively pleased.

Arriving in a blister pack, the Sennheiser HD 438 headphones include two detachable cables (1.4m and 3m) and a 1/4in adapter plug. Sennheiser boldly claims that the Sennheiser HD 438 "garnishes attention and flaunts power" — in our opinion, the attention is more likely to be of the deriding laugh kind. [Also: "Garnishes" attention?! — Ed] The chrome hubcaps plastered to the outside of each ear-cup aren't as bad as they could be, we admit, but they're still ostentatious and very shiny. The headband is designed in a way that it slants forward on the wearer's head — very rakish, we're sure, but slightly uncomfortable after long periods of listening.

Apart from the headband, long-term listening isn't a problem thanks to well-padded fabric ear-pads and a comfortable ear-cup shape. Using the longer cord allows significant movement away from your PC, so you won't get a stiff neck.

The audio quality of the Sennheiser HD 438 headphones will suit most people who want to play PC game or listen to music: there's reasonable clarity and tonality in treble and mid-range, with powerful mid-bass extension that makes in-game explosions and hip-hop music burst energetically. Treble is clear and even, and it lacks any harshness until higher volumes. However, we noticed that higher female vocals and brass instruments tended to be slightly muffled. Mid-range is the most detailed area, displaying a more balanced character than we expected from Sennheiser headphones at this price point. When listening to our test music, mid-bass really stood out — to the point of occasionally overshadowing other frequencies. It added a noticeable low-frequency kick to music and games.

The Sennheiser HD 438 headphones are closed: they sit over your ears, blocking out about half the background noise and allowing you to use slightly lower volume levels. The closed design also means people around you can't hear your music, making these headphones a good choice for commuting.

These headphones aren't particularly pretty, but anyone looking for sturdy pair with decent sound quality should give them some consideration.