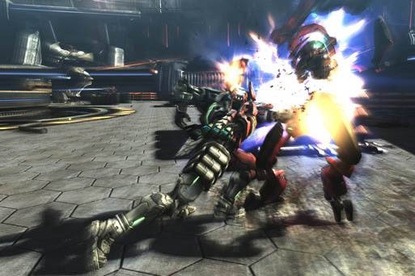 Since the start of its development in 2007, third-person shooter Vanquish has been something of a mystery. Directed by Shinji Mikami (known mainly for the Resident Evil series), the game looks like a Halo or a Gears of War. The good news it that Vanquish isn't just a retread of those hallowed franchises, as it exhibits some unique traits of its own; the bad news is that it exhibits some poor design choices whose faults are too obvious to ignore.

While Vanquish attempts to refresh the well-worn shooter genre, its story is all too familiar and not particularly creative. Mikami does set out to reheat the Cold War by introducing a WMD-wielding Russian super villain named Victor Zaitsev. You play as Zaitsev's nemesis, good guy Sam Gideon, a chain-smoking American football star, employee of DARPA (Defense Advanced Research Projects Agency) and wearer of DARPA's impressive Augmented Reaction Suit (ARS). This Master-Chief-like armoured suit with its jet boosters and built in weapon emulation system makes you nigh invincible, which is good because your mission to rescue kidnapped scientist Dr. Francois Candide and keep Zaitsev from blowing up New York City requires you to be fairly hardy.

Vanquish's gameplay offers as few surprises as its story and functions much like your basic run-and-gun. You can carry up to three weapons from the available pool — rifle, shotgun, machine gun, assault rifle, disk launcher (which fires spinning sawblade things) — and you can carry two types of grenades, EMP and explosive. A single button press lets you evade, take cover or perform a melee attack and both your ammo and your weapons can be picked up off the battlefield. Vanquish also features an "AR Mode" which you use like bullet time to slow everything around you and take down multiple targets. Even better, your suit allows you to perform a high speed boost slide on your knees like a rock star performing a smokin' guitar solo. The slide is awesome for evading enemies and for performing some very stylish kills, although if you do it too often your suit will overheat, leaving you vulnerable to attack.

Up to this point, Vanquish sounds like a solid action title that fans of games like Gears of War and Halo should enjoy; unfortunately, several design choices ruin its potential. For one thing, the game has an oddly abrupt beginning that walks you through a confusing, dated, somewhat out of context tutorial. Cliches also abound in the story: A space station, an armoured suit, a Russian villain, a kidnapped scientist, a tough guy hero with a grizzled, impatient military rival — it’s all rote material that you’ve seen a million times before. There is also a missed multiplayer opportunity here as well: the game is single-player only, but a good multiplayer co-op mode would have made Vanquish infinitely more interesting. Without question, the epic firefights would have been a compelling excuse to connect with a friend and rampage through them together.

Vanquish does have something to offer: you'll experience some of the hottest combat zones you've ever seen and probably find yourself cackling madly as you survive some of them by the skin of your teeth. The game has some clever level design that takes advantage of weightlessness and/or shifting and crumbling terrain, forcing you to navigate in three dimensions and also allows you to commandeer and use enemy turrets and Star Wars chicken-walker-like mechs. Combat is not only frenetic, but feels very real in terms of the large scale random destruction and the way your AI squad runs around on the battlefield. But ultimately, Vanquish is flawed and lacks originality. It does offer some interesting variations on a tried and true shooter formula, but I can't recommend this to anyone looking for a deep and compelling experience. If all you want is an adrenaline rush or to feel like a total badass for short, explosive bursts, however, then it's something worth considering.