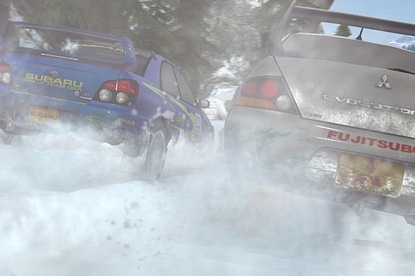 Sega Rally Revo may come off as unimaginative and highly repetitive to some, there is an ample amount of entertainment awaiting fans of the Sega Rally series, and those fans of arcade racers in general.

Recently we've seen a slew of high profile racing games that have openly embraced elements of realism into their gameplay, thanks to great new-generation graphics capabilities. While that's all well and good, sometimes you just need to get your fix of pure, unadulterated arcade thrills that abandon all pretences at realism.

If you hadn't guessed by now, Sega Rally Revo, takes a decidedly less than realistic look at its source material. Each race is three laps and takes place among one of several lush and detailed environments. Among other things, you'll be weaving over frozen arctic lakes, through idyllic alpine villages and through the muddiest jungle tracks. All in all, Rally Revo can justifiably be called one of the best looking racing games on the platform today, full of the colour and verve that has been missing in some other large titles in the past few years.

Furthermore, this graphical sensation also yields some positive gameplay elements through track deformation, present in every environment. In a brilliant bit of design, deformation isn't just eye candy; instead, as you slash through the dirt, mud and snow, preferred racing lines become apparent. Adhering to these give you a modest boost in speed and traction, giving you an edge over the competition during multiplayer games. However, this is largely rendered a moot point in single player, where your computer opponent remains almost magnetically on this line. Terrain differences mean you'll have less traction on snowy ground than in a muddy morass, for example, but these are felt to a smaller degree than the track warping.

With such a good arcade racing system set up, it's disappointing to see what paltry options are available to single player as most of the game is focused on the larger championship mode. This is divided into three class leagues, which are further subdivided into any number of events consisting of three races. The problem is that these events are just about all uniform, with only a small variation in tracks from event to event and the difficulty level as one unlocks further parts of the championship.

Gaining points in the championship does unlock features as you progress such as new vehicles, tracks and livery, but it doesn't really matter as many of the vehicles cannot be used in championship races, and unlockable tracks merely reverse the standard ones. Despite the fact that the base arcade gameplay is rather good, this lack of variation hurts tremendously.

Outside of the championship, players looking for a single-player experience can only partake in single races and time attack modes, both of which also become rather tired after only a small amount of time. The multiplayer portions rescue the game somewhat, for while they still remain fairly sparse, the ability to get together with up to five other players does lend staying power to the game.

Regardless of the shallow nature of its feature list, Sega Rally Revo does succeed in offering some wildly fun arcade racing. While it may come off as unimaginative and highly repetitive to some, there is an ample amount of entertainment awaiting fans of the Sega Rally series, and those fans of arcade racers in general.