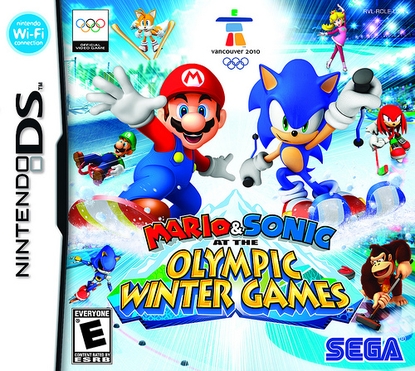 Mario & Sonic at the Olympic Winter Games is a compelling purchase for party game and curling fans alike. If it's a quick bout of fun you're after, it's hard to go wrong.

In February of 2010, athletes from across the globe will head on over to Vancouver, Canada, to participate in the Winter Olympics. For a couple of weeks, sports we wouldn’t otherwise care about will be plastered over our televisions, and everyone will suddenly become a curling expert in conversation.

Sonic and Mario have beaten the Olympics to the punch with their own branded game. It’s presented in a format that will be very familiar — collect various gaming mascots together, and throw them into a series of sporting events against one another. If you’ve played a Mario Kart, Super Smash Brothers or Mario/Sonic Tennis game, Winter Olympics will feel right at home.

On the Nintendo DS, it works quite well — there’s a wide range of proper Winter Olympic games on offer, ranging from skiing to figure skating, bobsledding, ice hockey and curling. There’s also an additional range of fantasy challenges, which take standard sporting events and throw in power-ups, bosses, and musical tunes.

Events are controlled either with the stylus and touchscreen, or the face buttons, and thankfully there are precious few events that require smashing buttons as fast as possible to win — the games are more skills based, and save the DS from an early death. For the most part, they work well, and events like curling and figure skating are incredibly addictive, but of course, with this kind of variety, not everyone is going to enjoy every game.

There’s a fairly weak story mode if you’re playing solo (really, Sega? Did we really need a story mode?) which involves the baddies (two guesses to who) stealing winter and Mario and Sonic teaming up to rescue it back — with some heated curling, no less.

It’s very much a lead-by-the-nose “talk to character x, compete in event y to progress” structure, and gets dull well before the story is completed. Thankfully, it’s a mode that can be completely forgotten. Trying to beat the best times in each event, and the ability to save ghost data to race against yourself are more than compelling enough for single player gaming.

Like any game of this style, multiplayer is where the real fun is, and it is here that Sega has really outdone itself. Every event is available for single cartridge download play. Loading times are long, but not painful, and there’s a series of minigames to spice things up further. If you can find competitive friends, Mario and Sonic at the Winter Games is easily the most full-featured game that doesn’t require everyone to track down their own copy of the game, and it is very easy to sink hours into it.

Throw in the WiFi leaderboards, and Mario and Sonic is a compelling purchase, especially for those who just know they’re going to be glued to the Vancouver Winter Olympics from ceremony to ceremony.