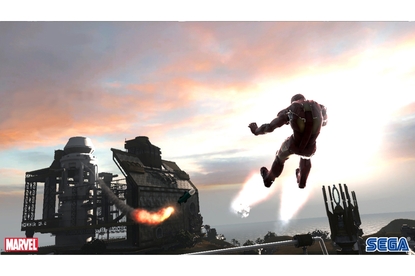 Poor Iron Man. He should be flying high right about now. After all, his new movie is opening in theatres and audiences will no doubt crowd the local cineplexes to ooh and ahh at his antics. But then comes along a video game adaptation that could have, should have, would have been the nice cherry on top of a delicious pie but instead leaves a bad taste in the mouths of gamers everywhere. Read on as we tell you why this movie licensed game might be worth avoiding.

After he's kidnapped by the same sorts of goons he used to sell weapons to, industrialist Tony Stark dons the mantle of Iron Man and embarks on a quest to destroy his former customers. Too bad this righteous turnaround is just a prelude to a ridiculously repetitive assembly line of unspectacular destruction.

You'd think that stepping into a powerful suit of futuristic armour would have translated into a thrilling video game experience. Who wouldn't want to hover in mid-air using blast jets, disperse guided missiles with a flick of a hand, ram a private military corporation gunship like a human missile or peel the top off a tank like you're popping a can of soda? Iron Man might not be a mutant or an alien, but he's still undeniably dangerous.

And while the combat in Iron Man has its moments, the execution leaves much to be desired. You engage in some awesome feats-catching and hurling a missile back at whoever fired it, for example-but the vast majority of combat is spent endlessly blasting through brainless automatons who rarely do more than sit in place and unload ammunition in your general direction. Even the bosses, who prove to be rather anticlimactic opponents, rely more on brute force and overwhelming firepower rather than intelligent tactics and cunning skill.

The level design is also surprisingly dull, with vast landscapes that have little character or depth. There are entertaining optional "hero objectives" like stopping missile launches or downing jet sprinkled throughout the levels but I'd gladly trade it all away for something that actually affected the gameplay in a positive fashion, like an upgrade system that didn't force you to horde credits just to buy some lame suit or weapon improvement.

Oh, and get this: the game also features a terrible difficulty curve. Imagining being forced to restart a mission because some super-cannon one-shot kills you through an obstacle. Or how about losing all of your lives in rapid succession because your suit's lock-on targeting refuses to target the rapidly regenerating blaster that's defending the submarine you're attacking? Any way you cut it, it's just not worth the aggravation to play through what is just another botched licensed movie game.