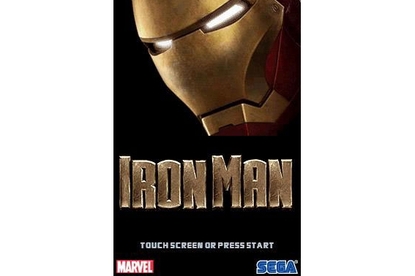 There isn't a lot to Iron Man. Young fans of the movie might get a kick out it though.

What is the measure of an Iron Man videogame? Is it the resolution of the next-gen graphics? Or the depth of the combat mechanics? Is it the system it's on? Or...okay, enough of that. Let's just say, if you recognise my altered quotation shenanigans, you will probably understand the plot of this game. By this time, you may have even seen the movie!

The DS version of Iron Man is mostly a top down shoot 'em up, although it does have a handful of on-foot sequences as well. The controls work similarly to Geometry Wars Galaxies for DS, where the dual analog scheme became the d-pad for movement and the stylus-to-touchscreen combo for aiming and shooting. Iron Man's fancy arsenal is mostly touchscreen buttons, but a couple moves overflow to actual buttons. Over the course of the Tony Stark/Iron Man's quest against Maggia and Obadiah Stane/Iron Monger's love for weapons of mass destruction, you'll earn points to put towards snazzying up your suit.

For the first level you'll wear the prototype with a flame thrower and melee attack. Jarringly, you're upgraded after that into the more familiar Iron Man suit, complete with guided missile, beam attack, EMP stunner and afterburners, in addition to a typical pew-pew blaster. Once you put some points into that gun, though, you'll be spouting twin pews way faster than your lips can imitate. Whether it's a speed increase or a stun lengthening, the power boosts are always satisfyingly palpable.

Iron Man is pretty short at just eight story levels, but you wouldn't really expect it to hold your attention for longer than that anyway. Despite some nice details like bullet art that scales to show that you're above ground troops and Robert Downey Jr. et al. providing voice samples, the general feel stays the same from mission to mission: follow waypoints to things to destroy, whether they be generators, communication towers or enemy suits. Once you clear story mode (and Black Sabbath's "Iron Man" loops three times during the credits!), you can fight waves of bad guys in four different arena levels, but you'll probably be pretty content with the number of helicopters you've downed by then.

There's nothing awful about Iron Man for DS, but there isn't really anything that spectacular about it, either. Shoot 'em up fans already know they can get great, stylish games online, so this one will probably be left to young fans of the movie.