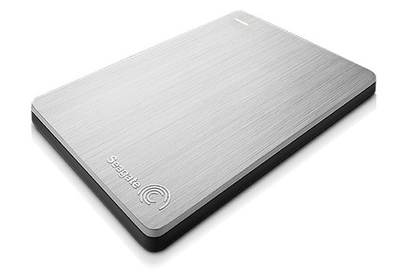 Seagate’s Slim portable hard drive is simple, quick, quiet, and trouble-free. There’s not much to criticise, since everything works perfectly simply. If you are looking for simple, small, light portable storage the Slim is a good choice.

No matter how fast your home network, Internet, or ‘the cloud’ gets, there’s always something to be said for the reliability, simplicity and ease of use of a portable external hard drive to store all your important data. Seagate’s Slim portable drive uses USB 3.0 and can manage some pretty fast transfer rates, despite running silently and being relatively cheap.

Seagate’s Slim portable drive is a pleasantly small device — at 9.6mm thick, 76mm wide, and 113.5mm long, it’s barely larger than an iPhone 4. It comes with a brushed-metal black or silver finish, although the back has a sturdy black plastic coating. The two-tone look is nice. There’s a Seagate logo on the lower corner of the drive, and a thin drive activity light with a soft white LED on the opposing corner.

There’s a single USB 3.0 connector on the ‘top’ of the drive, using the new USB 3.0 micro-B plug. We don’t love this connector, but it’s reasonably sturdy, and makes more sense than using a smaller micro-USB plug.

A cable just under 50cm (18 inches, or 46cm) is bundled in the Seagate Slim’s retail package, along with a fold-out quick-start guide. There’s no driver disc, because the Slim is detected automatically on any Windows XP, Vista, 7 or 8 PC and any Mac OS X 10.6 or newer computer.

The Seagate Slim portable drive comes pre-loaded with a small complement of Seagate Dashboard software, which includes a basic suite of backup software for your Windows PC, Facebook account or Flickr photo library. We didn’t give the backup software much attention, because we have a more impressive setup in place, but its inclusion is a good value-add from Seagate.

The Seagate Slim portable drive is only available in a 500GB capacity — it’s disappointing that there’s no 1TB version. We weren’t able to find out the speed of the hard drive that powers the Slim, but it’s likely to be a low-speed version to minimise both power consumption and drive noise — because during use, you can’t hear the operation of the Slim’s spinning disk even when you put your ear against the HDD’s outer casing.

We tested the USB 3.0 performance of the Seagate Slim and found that it performed well, writing files from our SSD-equipped test-bench at a rate of 99Mbps and delivering read speeds of 104Mbps — that’s basically around one 750MB DVD-quality movie file saved per minute, which is fast enough for irregular use. If you need faster speeds, you’ll have to look at a more capable SSD drive or an eSATA/Thunderbolt connection.

The Seagate Slim’s relatively low storage capacity (compared to other portable drives like the WD My Passport Ultra) means it’s not particularly expensive. We’ve seen it around for as little as $85, but you can find it from a big-box store like Officeworks for $95, which is still a perfectly reasonable price. We should note that another slim option, the Toshiba Canvio Slim, is slightly cheaper.

If you want a simple, good-looking, easy-to-use portable hard drive that is just about as portable as possible, the Seagate Slim is a good choice.