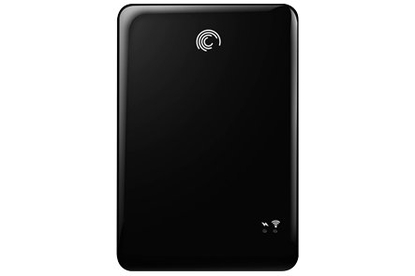 The Seagate GoFlex Satellite hard drive takes the shackles off your tablet, freeing it to connect to a greater amount of storage capacity — without having to go through any pesky wires. But although the hardware implementation is adequate, the software app struggles. A lot. At launch, Seagate is offering a messy, limited app for iPad and iPhone; an Android app equivalent is still in the works, so for now Android users must access the hard drive's contents using a comparatively crude Web-browser interface (admittedly, one not unlike the browser interface for standard network-attached drives).

The GoFlex Satellite is slightly thicker and larger than most other portable hard drives, but not onerously so. In fact, it's about comparable to Seagate's own 1.5TB portable GoFlex, and to some of Iomega's 1TB eGo models. Like the 1.5TB GoFlex, the GoFlex Satellite has a USB 3.0 USM adapter that plugs into the back of the drive; the use of USM opens the GoFlex Satellite up to a potential world of modular peripheral adapters, but it also adds about a half-inch to the depth.

Inside the chassis you get a 500GB hard drive with a battery rated for up to 5 hours of continuous streaming (assuming a single stream), or up to 25 hours of standby use. The device also offers integrated 802.11 b/g/n wireless (Wi-Fi being the secret to allowing a tablet with no ports to connect to the hard drive). On the outside are four functional additions: a DC input for the cleverly designed power cable, a power button to turn the Wi-Fi connectivity on and off, and two status lights on the top that show whether the wireless is on as well as the state of the battery's charge.

Seagate has ruggedized the drive's mounting inside its chassis, and improved its ability to withstand being transported helter-skelter. Seagate says, for example, that the drive was designed to endure being tossed into a backpack, and then being accessed from there — even while you're on the move.

Included in the box is a DC-input-to-USB 2.0 power cable. You can use this power cord to get juice through an extra USB port, via the 1.25-inch-square USB-to-wall-power adapter, or through the tiny USB-to-AC car adapter. It's a versatile design on the whole. My sole design gripe: The back cover that you can use to shield the USM adapter (if you prefer to pull off the USB connector) is difficult to remove.

In PCWorld Labs performance tests, the GoFlex Satellite earned a score of Good. It performed comparably to the Seagate GoFlex Pro, but other drives were incrementally faster on our tests.

Primarily, I tested the drive in conjunction with Seagate's GoFlex Media app on the Apple iPad 2. You can also use the drive via a Web browser — on Android tablets and phones, and even on iOS or Windows — but the experience is rougher there.

On the iPad, the iOS app starts off well with a pleasing two-pane interface that shows file-access shortcuts at the left and a viewer/access pane at the right. (On the iPhone, this structure is reduced to a one-pane-at-at-time approach, as necessitated by the phone's smaller screen.) On the left are sections for Videos, Photos, Music, Documents, and Folder View; tap there, and content of the appropriate file types then becomes visible in the main pane.

That good start is about as far as the app gets, though. In every other way, this 1.0 version comes up quite short. The problems are probably not unsolvable: Seagate has already said that it will address some of the disappointing aspects in future versions, and mobile users are certainly used to frequent app updates. Unfortunately, at this time the app is very limited, which in turn diminishes the usefulness of the drive itself.

Getting started is simple enough: You install the GoFlex Media app onto the iPad, and tap to open it. You can save a step if you go to the Wi-Fi settings and select the GoFlex drive as your wireless network before you open the app; otherwise, the app gives you instructions the first time you open it, or it will alert you when the unit is disconnected and you need to go out of the app to adjust the settings. Regrettably, fixing those settings is not something you can do from within the app. Every time it disconnects — or, say, whenever you exit the app to go to another app that needs an Internet connection — you'll have to revisit the settings to toggle to the Internet connection, and then do so again to reset the Wi-Fi back to the GoFlex Satellite. How much of this hassle is due to a limitation of Apple's iOS and how much is attributable to a limitation of the app itself is unclear; either way, it makes for a frustrating experience.

The GoFlex Media app does nothing to your files, and it has no built-in viewers, as some apps do. That means Seagate totally relies on Apple's iOS for file handling, and you can view a file only if it's already supported within iOS.

Seagate says it has optimized the app to handle video playback, and I found that the app does take care of the task well — with some peculiarities. You have to preformat your videos, or select videos that you bought from iTunes. Oddly, my iTunes-purchased, protected content could play, but only through the Web browser. At least that way I had audio available through the iPad's built-in speaker. My iPhone 4 videos played just fine in the app, but I couldn't get audio via the speaker; when I played the same video via the Web-browser interface, audio played just fine. Streaming worked surprisingly well for both high-definition (720p) and standard-definition video; I tried live-action and animation, and both types played fairly smoothly, albeit not perfectly (I noticed minor pixelation and macroblocking in some scenes).

To me, the frustrations with GoFlex Media seem to be basic design and development issues that lead to poor app behavior. Another example: When you're in the individual folders, you must first press a button (whose purpose is unclear) to get little checkboxes overlaid atop your images or documents; from there, you can choose whether to select individual files, select all files, play all files (in the case of music, photos, and videos), or download a file locally. Why not just allow you direct access, eliminating that extra, initial button press?

The app was also slow to reconnect to the drive after disconnection, and it was slow to display new content; sometimes, it would spin and spin and spin while trying to represent content, and it would have stayed in that state had I not clicked into a specific category.

Many more examples of poor design involve the photo component, which clearly is restricted in function. Once you open a photo, you can't move among your other images with basic next and back swipes, nor can you zoom in to a photo or do anything with it (at least in Apple's Photo Roll, you can tap an image to copy it, choose to e-mail or print an image, or select it as your new wallpaper). Photo icons display in an image thumbnail, but the aspect ratio is mangled, resulting in squashed-looking images. You can initiate a slideshow by selecting images and choosing 'Play all', but the result is crude: You have no control over the slideshow settings or transitions.

Even the locally stored content feels lost and limited: For instance, if you drill into music you've downloaded to your device, all you can do is play the tracks individually — you can't view them in any way but by file name, and you have no way to create playlists or sort by artist or album.

The GoFlex Satellite works fine in Windows Explorer — it's recognized as just another USB 3.0 hard drive there, and it performs as you'd expect any USB 3.0 hard drive to perform. You can't use the drive wirelessly while connected to a PC via USB, though. Seagate also includes a handy Media Sync software app to help you move content over to the drive. The app, for both PC and Mac, identifies your attached drives (Seagate and otherwise), and provides the ability to perform several precanned syncs: Simple iPad Sync (to find files your iPad can play or view), Simple Sync (to sync media folders with the external drive), and custom sync (to manually select the folders and media types to synchronize).

After I picked the iPad Sync function, I could then either proceed with the sync or choose to edit the sync options. From there, I could choose to sync files for iPad, iPhone 4, other iOS devices, other Apple devices, or other digital devices; changing the setting altered the set of file types supported in the sync. I then could select if I wanted photos, music, videos, and documents. Finally, I could decide whether to sync automatically or to click the Sync Now button.

Sadly, the GoFlex Media app never found and transferred my purchased iTunes video content. (Well, it found two parts of a multipart series of videos, and nothing else.) Seagate had no explanation for this.

Ultimately, the Seagate GoFlex Satellite is the first of what I expect to be many wireless hard drives designed to help tablet users get and share content from their PCs to their slates. The idea is clever, but the implementation leaves much to be desired. For now, this gadget is best left to those people who need to transport lots of video to a tablet — and who aren't concerned about digging through arcane file names and contending with glitches and poor app design. I'll update this review once the Android app becomes available, and if I hear that Seagate has overhauled the iOS app. It's frankly a shame that the company chose to rush it out the door with limited functionality.