Seagate offers a variety of cable modules to plug into the FreeAgent GoFlex Pro, including USB 3.0 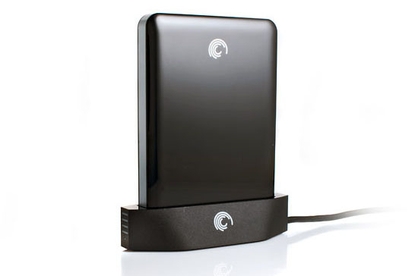 The FreeAgent GoFlex Pro is one model in Seagate's refresh of its portable hard drive line (desktop versions are available, too). The new GoFlex system this drive is a part of encompasses drives of varying colours and capacities, connection modules, and accessories.

The unique hook to these models is that Seagate has reengineered the devices to separate the drive from the bridge board that translates the drive's native SATA to another interface connection. As a result, Seagate can offer a variety of cable modules for use with a single drive--giving you plenty of connection flexibility. Of those, only the USB 2.0 GoFlex Cable can be removed from the connector module; the rest are fixed in place. The USB 3.0 cable costs US$30, the eSATA cable costs $20, the FireWire 800 cable is $40, and the Auto Backup cable (which turns the drive into an automatic-backup unit much like the company's now-retired Replica drive, using disk-imaging software powered by Rebit) sells for $30.

Another potential issue, though, lies with the module concept itself. The drive has not one, but two connections to pass through (the bridge module's connector, and then the connection from the bridge module to your PC). I found on the shipping unit I tried that the connector module could come unseated more easily than I'd expect--a risk when a drive might be sitting on an airplane tray table or the side of a couch. Another annoyance: You have to pop the module off to use it with the dock that comes with the Pro drive, for example (Seagate says a dock that accommodates the drive with the USB 2.0 module in place will be out later this year).

In the PCWorld Labs, the drive performed well--but surprisingly, even though the drive ran at 7200 rpm, its performance was largely comparably to the older 5400-rpm FreeAgent Go we'd tested previously.

Clearly, the GoFlex portable drives perform well, and will deliver fine if you leave it plugged into your chosen module on your desk. But the design is a bit kludgy, sadly. Unless you require the modular flexibility this drive provides, competing models may make a more compelling choice--especially if you need to use the drive in a dock, and then remove it from the dock to take it along with you.