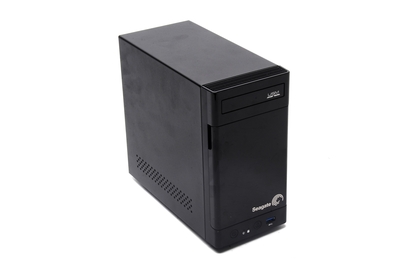 A solid 2-bay NAS device with two 4TB hard drives installed in a redundant array. Suitable for small office and home office environments where network storage for file access and backups is wanted. It can also be used for remote access.

Seagate's Business Storage 2-Bay NAS is network storage at its most sincere. It's a product that isn't high in 'wow' factor when you compare it to the likes of Asustor, Qnap or Synology, but it's serviceable as a repository for backups and any files that your want to share across your local network and beyond.

It's a product that's designed to be used either in a small office with a user group from 1-10, or as a home office network drive. The chassis stands tall and thin, and it looks good with its piano black finish, though we could do without the strong blue status LEDs. A door at the front hides two 3.5in drive bays, which allow drives to slide in and out easily.

We're looking at Seagate's 8TB version in this review, but you can also get it populated with a 6TB or 4TB capacity, or without any drives. The device comes in a RAID 1 array by default, so the 8TB capacity is actually 4TB, with both drives being replicated to provide data redundancy in case one of them fails.

Unlike the management environments that vendors such as Asustor, Qnap and Synology offer, with resplendent, desktop-like Web interfaces and downloadable third-party apps, the Seagate Business Storage interface has a more old-fashioned menu system and a two-pane display. It's simple to navigate because of this, and truth be told, it doesn't look bad at all.

When you first log in, you are greeted by the Dashboard, which gives you a nice overview of the system, including how much precious space is left on the hard drives.

Setting up the drive was a mixed bag for us overall, though. The hardware aspects and the connectivity to our network went as planned. We were up and running and able to access the drive through our Windows 8 network of computers within minutes. However, Seagate ships the drive with backup software that didn't work for us. First off, we had to download this software from Seagate's site (since it comes on a CD and our machines don't have optical drives), and secondly, the installation process failed without giving us a hint as to why.

If you're new to the NAS craze, then this will be frustrating. The good part is, the discovery utility that's part of the software bundle installed without a hitch. This utility should be used if you want to quickly find the NAS on your network and get into the management interface, and also if you want to subsequently map shared folders to your system (you will have to run it on all the computers that will require drive mapping).

The NAS device's operating system allows you to relatively easily create users and shared folders, and to add permissions for those users and folders. You can also choose to give users a set disk quota and to encrypt the stored data. There aspects of the interface that are not intuitive, though, with the quotas being a good example: the quota service needs to be enabled from one part of the menu, and then actual quota added from another part of the menu.

Likewise, if you wish to share videos and music via DLNA to your media streamer or gaming console, it's a bit of a convoluted process that involves enabling the service and then enabling the setting for each folder that has the media you want to share. Follow the instructions that are located at the top of each settings page so that you can get it all working. We had no problems serving media to smartphones and to our media streamer.

Remote access to your files can be enabled once you create an account with Seagate's Global Access site, which will keep tabs on your drive and allows you to access data on it from anywhere you have a Web connection. Multiple users will need to be set up with their own account to access their personal data remotely.

The performance of the drive was rock solid during our prolonged test period, and we didn't experience any connectivity issues or unexplained speed woes. However, the Web interface is what we'd call sluggish when it comes to changing settings. Folder and user settings, in particular, often took upwards of 10sec to appear, which was okay when we only had one thing to do, but tiresome when we wanted to change a lot of settings in the same sitting. It has a dual-core, 700MHz CPU and 512MB of RAM, which are specs that are not great when compared to a 2-bay product such as the Asustor AS-202TE.

Two Gigabit Ethernet ports can be found on the rear of the NAS, and these can be used for link aggregation and failover. There is only one power port, and power is by way of an external power brick. UPS (uninterruptible power supply) management is present, and there is a power schedule, too, which you can use to switch off the NAS during times you know you won't be needing it. Through our observations during our test period, the NAS didn't go to sleep on its own; the drives and cooling fan just kept on spinning, even when the NAS wasn't being accessed.

At the front, you will find the door through which the individual hard drives can be swapped out easily, and there is also a USB 3.0 port and a USM slot. The USM slot (or universal storage module) is one that allows for a Seagate Backup Plus Portable Drive to be inserted. A button on the front can be pressed when you want to copy data directly off a USB or USM drive and onto the NAS. Another USB 3.0 port is present at the rear, and this can be used to leave an external hard drive plugged in longterm for the purposes of sharing its data, or to back up the NAS device.

You don't get any consumer-centric features such as a built-in torrent downloader, but there is a download manager for HTTP and FTP downloads. Firmware updates are performed automatically by the system, but there is no way to force a check for a new firmware. You'll have to check manually just to make sure.

Here's the thing, though: we couldn't find this drive when browsing Seagate's Web site. To check for firmware and to download the backup software, we had to head to the general support page and punch in the serial number of the drive (not the number in the Web interface, but the number at the back of the NAS). Hopefully it's something Seagate rectifies soon.

Despite some of the issues we had, our overall impression of this drive is a positive one. It performed reliably as a file server for our local network, and it was easy enough to set up and use, though we think a novice user might find it a little intimidating. It doesn't have the bells and whistles of other, app-centric NAS devices, and we wish the overall offering was more refined — especially when it comes to its backup software and support on the Seagate Web site. But if you know what you're doing and just need a device on which to store your data for local and remote access, it's a worthy choice.

The price we've listed is for the 8TB, 2-bay drive, but there are also 1-bay, 4-bay, and 8-bay models, and you can buy the case only and use your own drives if you wish.