Seagate's 3TB Barracuda is a good performer and it provides a lot of space in a single hard disk package. We also found it to be a relatively cool and quiet performer. It will work best as a secondary drive in a typical PC, but a motherboard with a UEFI BIOS will be required if you want to use it as a boot drive.

Sometimes you just need to have all your stuff stored in one place. Having multiple drives and partitions can get confusing when it comes to both accessing your data and figuring out what needs to be backed up, not to mention the mess of power and data cables that comes from installing more than two hard drives in your case. With Seagate's 3TB Barracuda (ST3000DM001), which is a 3.5in internal hard drive, you can simply store all you have on the one drive, in a single partition. But it isn't a drive that's straightforward to install, especially if you want to use it as a boot drive.

The easiest way to use the 3TB Barracuda drive is as a secondary drive on your Windows 7-based desktop (32-bit or 64-bit). After plugging it in to one of your SATA ports and powering up, you'll need to activate the disk through Windows' Disk Manager. Unlike most of today's drives, the 3TB Barracuda won't give you the full benefits of its total capacity unless you choose GPT (GUID Partition Table) as its partition type -- it won't work properly if you choose MBR. Choosing MBR will restrict you to only 2.1TB of the drive's capacity and leave 746GB of space unusable. When you select GPT, the entire partition, all 2.72TB of usable space, will be available for formatting.

If you plan to use the 3TB Barracuda as a boot drive, then you won't be able to use all of its 3TB capacity unless your motherboard has a UEFI BIOS and can use GBT partitions. We installed the 3TB Barracuda as a boot drive on our Intel-based ASUS P7P55DE Premium motherboard. The drive was detected without any problems and Windows proceeded to install on it, but only 1.99TB of space was usable on the disk. Because MBR was used as the partition type, 746MB of space went unusable, and because the drive was already using MBR as the partition type, we could not convert the drive to GPT in order to format the remaining space.

As an MBR disk, not all of the 3TB drive's space will be usable 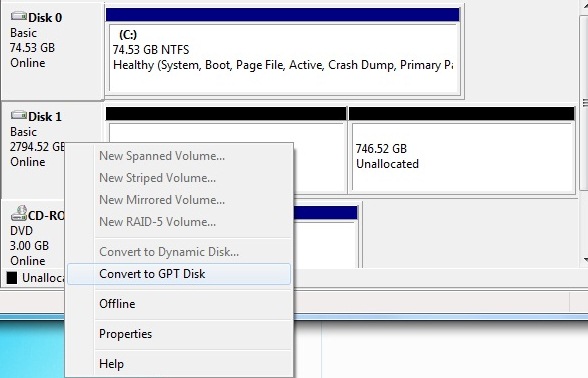 As a secondary drive, the GPT partition format must be selected in order for all of the available space on the drive to be usable.

Initialised as a GPT drve, the entire 2.7TB of usable space is available to use for partitioning (above) and formatting (below).

If you want to use the 3TB Barracuda on a Windows XP system, then you will need to run Seagate's DiskWizard program to make the drive usable under that operating system.

Technologically, Seagate's 3TB drive is another modern wonder. The drive itself has a built-in dual-core processor and DDR2 memory. It has a high aerial density that packs 1TB of data per platter, and as such there are three platters and six heads located within the drive. Because of the higher density, Seagate has introduced proprietary technology called AcuTrac, which uses a secondary actuator on the main actuator to improve reliability — it's on a nano scale, with the second head being only 75 nanometres in size. Basically, it's an extra head that can make microscopic adjustments to ensure sure the right data is being read all the time. It's primarily implemented to counter vibrations, which can be especially problematic on a disk that has 340000 tracks every 2.5cm.

Other features of the drive include a 64MB cache, a 7200rpm spin speed and a 6Gbps SATA III interface. All of these features, along with the dual-core CPU, better algorithms and the higher data density, which allows more data to be read and written in a single spin, contribute to the overall performance of the drive. We found it to be a zippy drive, especially when reading sequential data. In CrystalDiskMark, the Barracuda averaged a read rate of 195.2 megabytes per second (MBps) for 1GB files, and 172.1MBps for 100MB files. This was a little slower than what the 1TB WD Raptor hard drive achieved in the same test, but faster than Hitachi's 4TB Deskstar drive.

The Barracuda's sequential write times were actually faster than the WD Raptor, recording 149MBps for 1GB files and 147MBps for 100MB files. It produced similar times to the Hitachi in this test. In our own file transfer tests, when reading and writing two sets of data on a PC with an Intel solid state drive, the Seagate's results were a dash slower compared to the WD Raptor and Hitachi drives, but not enough to write home about.

As for heat and noise, the Barracuda didn't get overly hot during our test period, and it definitely wasn't too hot to touch; likewise, it didn't make too much noise while seeking data — in a solid case with good muffling, it will most likely remain unheard during normal operations.

We think the 3TB Seagate is a good drive overall and one that should be considered if you want to store lots of data in one place, and especially if you want to consolidate data from multiple drives and free up some internal case space. Backing it up could be a hard task though; you'll definitely need to pick up a large external storage solution to store a duplication of the data on the 3TB Seagate. Installing it as a boot drive will also be problematic unless you have a motherboard with a UEFI BIOS.

At the time of writing, street prices for the 3TB Barracuda ranged from $205 to about $280, equating to a cost per formatted gigabyte between 7.5 cents and 10.2 cents.