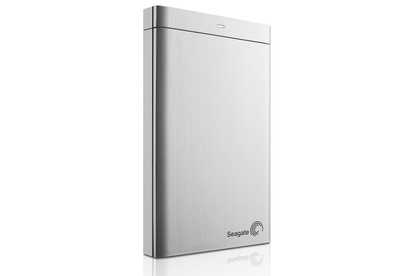 The Seagate Backup Plus Portable Drive comes with software that can backup your Facebook and Flickr photos in addition to your computer's data. However, the implementation of that feature could be better and some other aspects of the software need to be worked on, too. It's a quick and quiet drive though, and also very light.

The Seagate Backup Plus Portable Drive is a 2.5in hard drive-based external storage device that can be used as a backup drive not only for your computer, but also for photos that you have uploaded to your Facebook and Flickr accounts. It's the latter functionality that makes the Backup Plus stand out, and it can be a very convenient drive if you're the type of person who uploads to those accounts frequently from mobile devices.

The Back Up Plus Portable Drive is available in capacities of 500GB, 750GB or 1TB, and it ships with a USB 3.0 interface. The USB 3.0 interface is an attachment that can be removed from the drive to expose its standard SATA connection, and it's removable because Seagate also has other interfaces available for this drive: Thunderbolt and FireWire 800. You can buy those attachments for your computer if your interface requirements ever change.

We like the plain look of the drive, which has a two-tone colour scheme and a single indicator light, but no buttons. All you need to do in order to use the drive is plug it in to a USB port on your computer; there is no need for supplemental power as all the drive's power requirements are met by the USB port. We tested the 500GB version for this review, which has a formatted capacity of 465GB. The drive itself was practically silent during operation apart from some soft noises as the heads moved to seek or write data. Furthermore, only a faint vibration could be felt as the drive's platters were spinning. It comes formatted with the NTFS file system, but Seagate supplies an NTFS driver for Mac if you ever need to read and write data from an Apple computer in addition to a Windows PC.

You need to install the supplied Seagate Dashboard 2.0 software in order to use the drive as a backup device. This software can be installed from the root directory of the drive after you plug it in to your computer, and you will need to restart your computer in order to successfully complete the installation. It's software that will reside in the System Tray area of your Windows computer after you run it, and it can be used to automatically backup your computer's hard drive continuously, or you can select the drives and folders that you want to back up specifically (and either continuously or at another frequency).

Indeed, after an initial backup, the software can continue to backup your data as changes are made to it, and as new files are added to your backup locations. This means that the software saves different versions of files and you can easily go back in time to restore specific file versions if you need to — the software shows a handy little timeline at the top of its restore window. In addition to using the restore process through the software, you can also grab files off the drive manually. Backups are stored without encryption using a deep folder structure in the 'Seagate Dashboard 2.0' folder, and they are sorted by computer name, which means you can effectively use this drive to backup multiple computers, too. Be prepared to sift through many folders though, as each change in the backup gets its own dated folder.

When you first launch Dashboard 2.0, there are three options: Protect, Share and Save. Protect is the option that will allow you to backup your computer and 'Protect Now' is the option that will automatically and continuously backup all non-system files on your computer without any user intervention. If you want to control your backups, then you will need to select the 'New Backup Plan' option. Once you have made some backups, then you will see the 'Restore' and 'Backup Now' options appear in the Protect portion of the software. You can use restore not only to restore files from a particular location, but also to restore them from a particular time.

While it's a very easy program to use, we wish it was designed a little better. It has a window that's invisible around the edges of the program, which can make it awkward to move the window around, and there is no way to maximise the window either. Something annoying that we noticed with Dashboard 2.0 was that it would sometimes steal the focus from other programs. For example, after installing Dashboard 2.0 and running it on our main computer, any videos that we watched in full-screen mode would, after a while, become windowed. Additionally, sometimes as we typed, we found that our word processor window would lose focus. When we exited Dashboard 2.0, those problems went away.

Save is the option that allows Dashboard 2.0 to download and keep copies of the photos that you upload to Facebook and Flickr. You will need to enter your account details for these sites and then check the 'Auto Save' box if you want all new photos that you upload to be download automatically without your intervention. Unfortunately, the software downloaded only the 'large' version of our Flickr photos, rather than the original size; from Facebook it saved the small version of photos. We're waiting to hear back from Seagate on whether this is normal.

We had few problems using the Save option to backup photos that we uploaded to our Facebook and Flickr accounts. Photos that have been organised into albums on Facebook and in sets on Flickr will be downloaded to folders with the same names as those albums and sets. There was one time during the initial backup of our Flickr account where we experienced problems. The backup failed and we could only get it to work properly on another computer. This only happened once.

However, we experienced a similar problem numerous times when using the Share feature of the software. You are able to upload photos directly to Flickr and Facebook through Dashboard 2.0 Share feature, and you can upload to new sets or albums. Every time we tried this feature, the upload would either fail or tell us that was finished, but 'with issues'. We tried different computers, different Internet connections, re-installing the software, and re-enabling permissions for the software to run with our Facebook and Flickr accounts, but we couldn't get around this issue. We're awaiting word from Seagate.

The chances are you'll never use the Dashboard 2.0 software to upload photos to your Facebook and Flickr accounts, but since the feature is included in the software, it would be nice if it worked without any issues. Apart from that though, the Seagate Dashoboard 2.0 performed its main task well — it was able to backup our computer's data. We hope that an update of the program will have a better interface, that it will sort out the issues we had with failed transfers, and that it will also add the ability to download original photo sizes from Flickr and Facebook.

As for the drive's performance, we tested it on a laptop with a fast solid state drive and a USB 3.0 connection and found it to be quick. The Seagate was able to write a handful of video files (2.7GB worth) at a rate of 85.3 megabytes per second, and read them at a rate of 97.5MBps. A combination of hundreds of photo files and a handful of video files (6.17GB worth) was written to the Seagate at 75.24MBps. It read those same files at a rate of 99.51MBps. It's definitely a zippy little drive, especially if you're using it to transfer data from an Ultrabook with a 128GB SSD, for example, and a USB 3.0 port.