Guerilla's cult-hit Killzone returns, and this time the gritty post-apocalyptic bullet storm takes place on the PSP, dumping the first-person perspective of the original for a pseudo-isometric view. 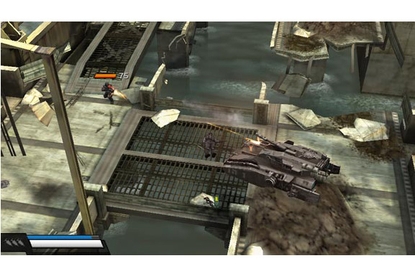 Despite not being a perfect game, Liberation is a worthy new chapter in the Killzone series that does more right than it does wrong. Any Killzone fan would be missing out to pass this one up.

Killzone: Liberation doesn't feel like a true sequel to the PlayStation 2 shooter, and it's certainly no substitute for the PlayStation 3 Killzone, but it's still a commendable new chapter in the series that fans will embrace.

It has been almost two full years since the original Killzone was released, but only two months passed in the Killzone universe and the Helghast Empire is stronger than ever. Lead by the tyrannical General Metrac, the Helghast stormtroopers have imprisoned ISA VIPs and the only one proficient enough in executing those gas-masked fascists is Captain Jan Templar, the main character from the first game.

The beginning of Killzone: Liberation is very much like the beginning of its predecessor. You start off running around in the hollows of blood-smeared trenches, but will eventually fight in a variety of all-new environments. One of the more notable new features of the game is the tactical command system, where you can give orders to an AI ally. Everything from positioning a soldier to detonating C4 explosives can be done under this strategic system. The best part of this new command system is that it is extremely simply to use.

It seems as though Guerilla has listened to its fans because much of what was left to be desired out of the original has been included in Liberation. Vehicle missions, where you'll be able to control a futuristic tank and even a hovercraft, make for a richer gameplay experience and were something that many felt was missing from the original. There are also a bunch of fresh content to have fun with such as a jetpack that you can fly around with, a crossbow that shoots explosive-tipped arrows, a flamethrower, cyborg Helghast canines, boss battles, and the list goes on. In terms of multiplayer support and extra modes, you won't be disappointed. You can battle alongside your friends in the campaign co-op mode. Deathmatch, team death match, assault, and capture the flag are also available.

Unfortunately, Killzone: Liberation does have some flaws. The graphical detail has slightly been reduced since the first game and the targeting-system can be frustrating. Sometimes just aiming your weapon at an enemy is hard to do. But the main gripe I have with Liberation is that it is too short. 16 levels may sound like a reasonable number, but the truth is that the campaign mode can be completed in several hours.