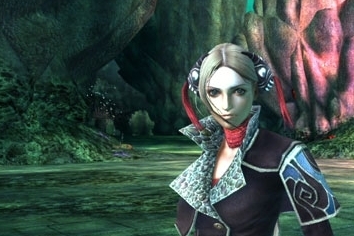 Although Folklore isn't perfect, it is definitely one fairy tale worth finishing.

It's hard not to be mesmerised by the visual elements of Folklore. Not only are they beautiful and crisp, but they are a breath of fresh air in the otherwise fantasy-dominated RPG genre. The Celtic background gives ample space for some truly original design, and nearly every one of the monsters we battled (there are more than 100 in the game) was stunning to look at.

Unfortunately, once you get over how great everything looks, this action RPG is stunted by a few problems that hold it back from growing into a perfect game.

As the game begins you are introduced to each of the two main characters, Ellen and Keats, and play through the chapters as each of the protagonists. The problem with this is that the story unfolds very slowly, especially towards the very beginning. The beautifully rendered cut-scenes are sparse, with the story mostly being told through static images with the dialogue in speech bubbles, much like a comic book. While the narrative is compelling, it drags on at such a snail's pace that I found myself impatiently wanting to get back into battle.

The game has an interesting approach to battling monsters. As you go though the game, you capture the spirits, called ids, of monsters and use them to attack your foes. The catch is that after you beat down a baddie you use the six-axis control to yank the spirit out by pulling up on the controller. This is executed amazingly well, though after a few hours it started to lose its novelty. There is a bit of strategy involved to battling the ids as some are only susceptible to certain spirits, but unfortunately, there just isn't enough variation to keep the game play from feeling repetitive.

Folklore also plays out in a fairly linear fashion, though the levels that you traverse are interesting. From the Hell Realm to the Faery Realm to the Undersea City, the locales are unique and wonderful. Despite the game's faults, we were drawn into the game for the same reasons that we are drawn into fairy tales -- we wanted to see what was just around the next corner.

What saves this game from being just another monster collection RPG is the compelling narrative and the unique environments. We are also looking forward to the downloadable content which should help keep things fresh in the future.