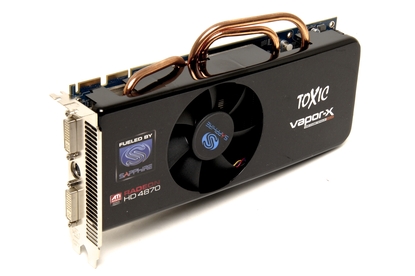 The Sapphire Radeon HD 4870 TOXIC is a cooler and slightly more powerful alternative to the standard HD 4870 board. It will mainly suit DIY overclockers who want to get the most out of their system without turning their PC into a furnace.

If you’ve been holding off from buying a Radeon HD 4870 for the past few months, your patience is about to be rewarded. The Sapphire Radeon TOXIC HD 4870 is a factory overclocked version of ATI’s popular graphics card, offering increased clock speeds and a much-improved cooling solution over its vanilla cousin.

While its real-world performance gains aren’t particularly earth-shattering, it remains a very cool option for hardcore gamers (pun very much intended). On the other hand, we feel it might be a tad overpriced — at $579, the TOXIC edition costs $130 more than the Sapphire Radeon HD 4870, which almost matched it in our gaming benchmarks. What you’re basically paying for is the custom-built cooler, something the average user may or may not require. Nevertheless, it remains an exceptional midrange performer that 3-D enthusiasts will love.

The Radeon HD 4870 TOXIC follows the same design template as Sapphire’s previous overclocked card, the TOXIC HD 4850 (512MB GDDR3 PCI-E). It comes with increased core and memory clock speeds out of the box, along with an overhauled cooling solution for added stability. Otherwise, it shares the same basic architecture as the ATI HD 4870 reference board, including 800 stream processors, 40 texture units, 512MB of GDDR5 RAM and a 256-bit memory bus. (For a more detailed look at the ‘RV770’ chipset, check out our original ATI Radeon HD 4870 review.) We were kinda hoping Sapphire would boost the memory to 1GB, but no such luck.

So let’s take a look at those changes in full. The onboard memory has received a speed increase of 100MHz (for a total of 1.0GHz), while the core clock speed now stands at 780MHz (a more conservative boost of 30MHz). Thanks to the inclusion of ATI’s Catalyst configuration software, these clock speeds can be boosted further, to 1200MHz and 820MHz respectively. Naturally, all this overclocking causes additional heat, which is where the TOXIC’s trump card comes in: Vapor Chamber Technology.

The Radeon HD 4870 TOXIC is the latest graphics card to use Vapor Chamber Technology (VCT). This is an advanced cooling solution that incorporates a vacuum chamber and a series of wicks that draw heat away from overworked components via recirculating liquid. In addition to the VCT chamber, the board comes with three copper heatpipes, multiple fins and an 80mm thermally controlled fan. During peak usage, the GPU’s temperature hovered around the 40 degree mark, which is certainly an improvement over the ATI reference board, which regularly reached temperatures of 80 degrees plus. If you regularly push your cards to breaking point via taxing applications and DIY overclocking, this is definitely to be appreciated. However, those looking for a significant performance boost might be slightly disappointed.

When we ran 3DMark 06, the Radeon HD 4870 TOXIC returned a score of 11,102. This was curiously lower than the ATI Radeon HD 4870 reference board, which returned a score of 12,851. In our F.E.A.R. benchmark demo, the TOXIC returned an average frame rate of 127 frames per second; this was six frames faster than the ATI HD 4870, which averaged 121fps. In the DirectX 10 version of the game Lost Planet: Extreme Conditions, the HD 4870 TOXIC came out slightly on top with an average of 36.75fps (compared to 32fps from the ATI card). Similarly, the game Crysis averaged 20.4fps with the TOXIC and 19.5fps with the ATI — a difference of less than one frame per second.

Almost without exception, the performance gains listed above are unlikely to make much difference to your gaming experience. This was true even after we maxed-out the TOXIC’s core and memory clock speeds, which yielded only a few additional frames per second in each game.