Following in the only slightly larger footprints of the sizzling 5870 graphics card comes this downscaled version, the Sapphire Radeon HD 5850 1GB. 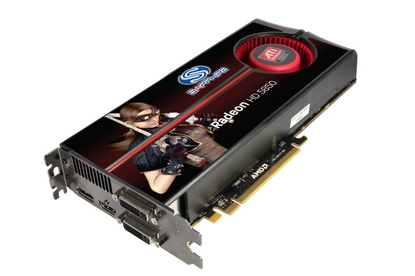 While the 5870 is all about showcasing innovation, the Sapphire Radeon HD 5850 1GB also boasts plenty of power, with many of the same features. The clincher, though, is the price.

While the 5870 is designed for ultimate single-chip performance, the ATI Radeon HD 5850 aims to be a more modest version, yet one fast enough to satisfy demanding gamers.

You don't lose a great deal. Both use the 40nm manufacturing process, but the Sapphire Radeon HD 5850 1GB card is shorter, runs cooler and consumes a little less power - although still requires a pair of 6-pin power connectors.

It offers the same useful duo of HDMI and DVI ports, and can support up to three screens. There's the potential to stretch some games across three flat-panels using Eyefinity - creating an immersive cockpit in a flight sim or racing game, for example, or giving a wider range of view in a First Person Shooter.

We'll have to wait a while yet to see DirectX 11 games in full glory. A small number of titles tuned for DX11 are due out before next year, but right now, all we have to judge is Battleforge, taking a small sampling of DX11's promised capabilities.

The most significant use of DX11 in the Sapphire Radeon HD 5850 1GB is in improving performance through compute shader, giving an extra 19 percent framerate in our tests.

But until we see games showcasing a range of DX11's artillery, we can't honestly assess these cards of their DirectX11 worth.

The Sapphire Radeon HD 5850 1GB is a clear contender on performance - never quite reaching the heights of the 5870, but neither finishing too far behind. Both the nVidia GTX 295 and ATI's 5870 remain ahead, but those cards are an awful lot more expensive. And the 5850 gives the 4870 X2 a good fight, beating it comfortably in a number of tests.